FOSS FACEBOOK RULES: FOSS honours the concept that Sam Smith Park is a nature sanctuary. FOSS rules state that there shall be no harassing/baiting of wildlife. As a result of recent unacceptable behaviour exhibited by some park visitors, FOSS will not be publicizing the sighting of birds and animals on its Facebook page. Existing unsuitable posts will be eliminated and FOSS’s rules will be enforced.

WHIMBREL POINT PLANTINGS: Along with two representatives from the Toronto and Region Conservation Authority (TRCA), 15 FOSS volunteers (following strict COVID-19 rules) completed planting a variety of native trees, shrubs and flowering plants at Whimbrel Point. In a thank-you letter sent by FOSS, a request was made for the non-ticketing of volunteers’ vehicles at future events.

BIRD STRIKES: Birds have been killed after striking the windows of the Power House at Col. Sam. FOSS has organized a petition that asks the city to apply anti bird strike dotted film to the windows. City representatives have yet to respond.

CENOTAPH RE-LOCATION: The 8th Street Cenotaph will be located to Col. Sam Park. Please refer to the FOSS blog for photos and more information.

BIODIVERSITY INVENTORY: FOSS plans to conduct an inventory of the flora and fauna of the remaining forested area of Col. Sam in the spring of 2021.  It is hoped that the knowledge gained will help counteract any threat to its future survival. FOSS suggests that this precious resource be called “The Wildwood” (located between the two schools, south of the footpath).

NATURE’S SANCTUARY PHOTO EXHIBIT: Due to COVID-19 restrictions, the exhibit is tentatively re-scheduled for Fall 2021. A new date (when confirmed) will be posted on the FOSS blog and Facebook sites. Save your photos until then.

FACEBOOK POSTINGS OF COL. SAM PARK’S BIRD SIGHTINGS: Many FOSS Facebook followers have expressed concern about crowded conditions at Col. Sam. Many believe that posting bird sightings serves to encourage ever more visitors. Some visitors are apparently not practising “social distancing”. To alleviate such problems, FOSS encourages birders to post only their back yard counts.

DRUG/GARBAGE/TREE PLATFORM PROBLEMS AT COL. SAM: Discarded drug paraphernalia and litter are on-going detriments in the park, particularly in the North Creek area. Visitors are asked to notify the police at 416 808-2200 for drug infractions and 311 for trash build-up. Any problems reported to 311 are greatly strengthened when accompanied with a photo.

The City has started work on the site for the soon-to-be-relocated Cenotaph that currently stands outside the Legion on Eighth Street.  The Legion property has been sold to a developer. 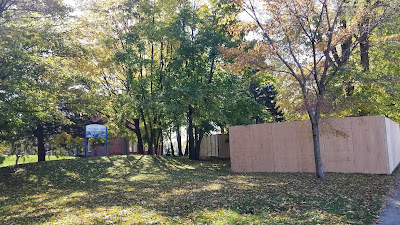 The Cenotaph will be placed on the north side of the Assembly Hall, right on Lake Shore Boulevard, just east of Kipling Avenue.  Tree protection boxes have been installed to safeguard the adjacent trees.  Councillor Grimes' office has told us "there will be a path from the cenotaph to the sidewalk along Lake Shore, ideally 2 flag poles, and likely benches. We are working with the Legion on this project, and will do what is necessary to establish the cenotaph in its new location." 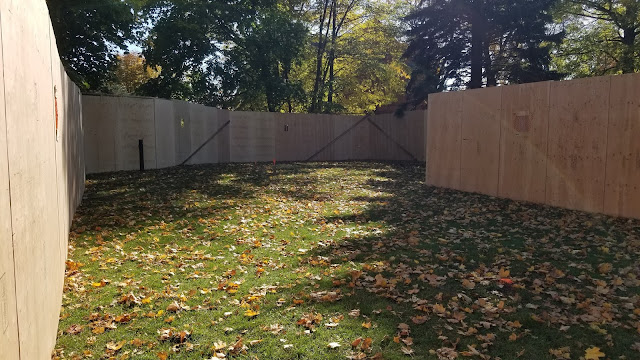 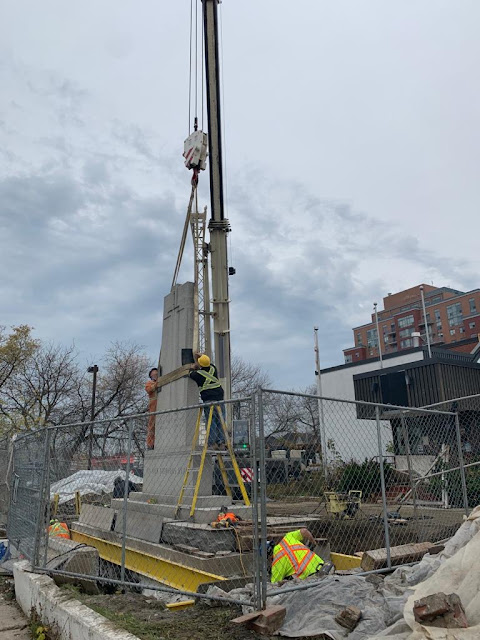 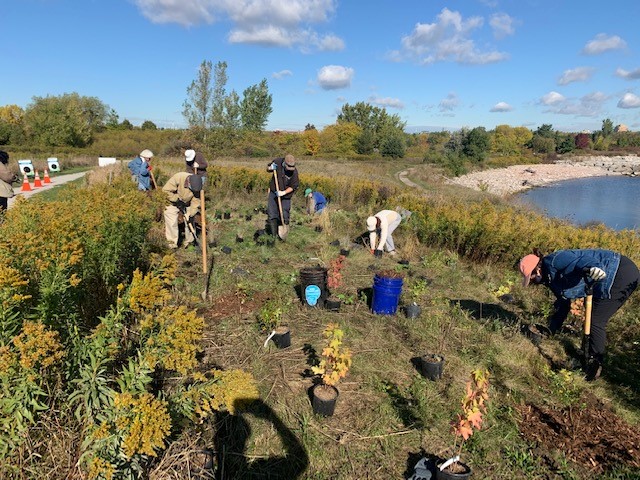 As a member and president of FOSS, I attended a planting at Whimbrel Point, Col Sam Smith Park.

All volunteers had to sign-in online for attendance control and COVID 19 clearance.

The planting started at 10 am. 15 volunteers had signed up to help. Many of them were members of FOSS Steering Committee plus members of FOSS and other locals who saw the request distributed by FOSS on social media. 14 listed volunteers showed. We all wore our masks.

This made a full complement of volunteers.

When we arrived at the Point, the TRCA leader and assistant were already present. They had ample signage placed on the approach to the Point saying what was going on and listing the COVID protocols. Other park users stayed clear of our planting.

They had placed all the shrubs and other plants we were going to use in the designated spots for each. These areas included two patches. One was mostly planted the year before but was now cleared of weeds. There was a large variety of plants. Tools were placed at the site for us. We used our own shovel for the planting and put it in a used pile at the end.

Before we started, Jacob Mokrzynski and his assistant welcomed us, gave background, checked us off his list and explained the COVID rules.

We were broken up into groups and brought over to the planting site where the work was described. We then had a sample planting done for each group so that plants were put in properly, giving them the best chance for success. The mulching for each type was also explained. There was a large pile of mulch placed at the site for us to gather in buckets for each plant.

Jake and assistant worked alongside each group to answer questions and assist with the planting. They had a tent set up as well but it was not used. The weather was cool and ideal for the work.

Mulch was used for each plant and the excess was used to coat the entire area to help prevent weeds from growing in the patches.

I took several photos of the operation as well as a group photo at the end. We were finished before noon, which was the planned end time. The photos were placed on the FOSS website and to other media.

Last year when we did the planting in the first patch by the point, we took a longer time-period. This was a problem for those of us who had cars in the south parking lot, as after two hours of parking, tickets could be given. I went back to the parking lot early to ask the parking authorities not to ticket us. They had chalked the tires and were about to ticket. They took my story and did not ticket there. A simple solution to this problem with volunteers being ticketed would be to provide a small sign on the registration site to those registered to be put in the windshield showing TRCA Volunteer Event with the date.

The process and execution of the planting was very well prepared and executed by the staff of the TRCA.

I thanked the TRCA staff present as well as all the volunteers for their work.

I also thank their boss Vince D’Elia for checking in near the end of the planting and for his part in getting staff and organizing the event. 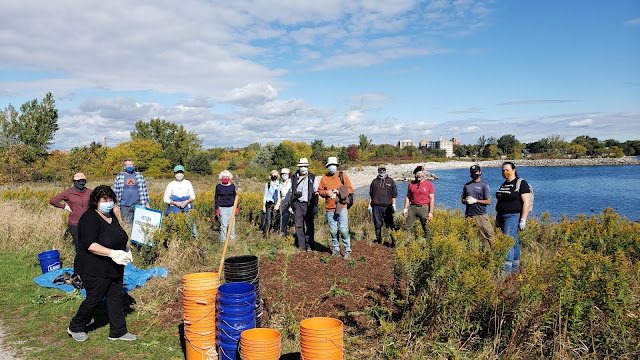 Friends of Sam Smith Park thanks the 15 volunteers, including 5 steering committee members, who came out today for the planting of native shrubs on Whimbrel Point.