Note:  Although this article focuses mostly on songbirds, it also touches on the many other species that pass through the park every spring, and the information can be applied to all of them. Bird names appearing in this article are linked to Cornell's All About Birds for more information on each species.

Why do birds migrate?
The ancient drive to follow time-worn migration routes every spring and fall probably began as an adaptation to climate and food availability, but over time it became part of the birds' genetic makeup. Birds also incorporate responses to weather, geography, food sources, day length, etc. But why make such an arduous trip north in spring?  One idea is that the seasonal abundance of insect food and greater day length allowed them to raise more young (4-6 on average) than their stay-at-home tropical relatives (2-3 on average).

Do all birds migrate?
Most birds fit into the following categories:

Permanent residents do not migrate and
are able to find food supplies year-round
(example: Northern Cardinal).

Short- to -medium-distance migrants follow
the most variable patterns, often in response to abundance of food (example: Blue Jay).


Long-distance migrants typically move from breeding ranges in the U.S. and Canada to wintering grounds in Central and South America.  Long-distance migration is carried out by some 350 species of North American birds (example: Magnolia Warbler).


How do birds navigate?
Migrating birds can cover thousands of miles annually, often travelling the same course year after year with little deviation.  First-year birds often make their very first migration on their own.  Somehow they can find their winter home despite never having seen it before, and return the following spring to their birthplace.
The secrets of their amazing navigational skills aren't fully understood, partly because birds combine several different senses when they navigate.  Birds obtain compass information from the sun, the stars, and the earth's magnetic field.  They also get information from the position of the setting sun, as well as landmarks seen during the day.

Some species, particularly waterfowl and cranes, follow preferred pathways on their annual migrations.  These pathways are often relate to important stopover locations that provide food supplies critical to the birds' survival.  A perfect example of this is the Whimbrel, a large tundra-nesting shorebird that stops over in the park annually in large numbers, the flocks touching down only twice during their long-distance migration. Smaller birds tend to migrate in broad fronts across the landscape.  Recent studies using eBird data are revealing that many small birds take different routes in spring and fall to take advantage of seasonal patterns in weather and food.

A thousand-mile journey annually tests the birds' physical and mental abilities. The physical stress, bad weather, lack of food, and predators contribute to the hazards of the trip.

In recent years, long-distant migrants have been facing a growing threat from tall buildings of glass  and steel. Many species are
tricked by
reflective  surfaces and millions are  killed each year in  collisions with these  buildings.  FLAP (Fatal  Light Awareness Program)  is dedicated to rescuing  injured birds and seeking  solutions to this issue.


How do I know when birds are migrating?
Have you ever gone to the park early on a May morning, expecting trees dripping with warblers and vireos, only to end up with a face full of midges and mosquitoes?  That luck, good and bad, often takes the form of the weather patterns the birds encounter.  Weather can delay, detour, or even speed up migrating songbirds, and the prepared birder can check several sources to get a better sense of when and where they might show up.
Wind speeds are an important factor:  It's easier for birds to migrate with a  tailwind than a headwind.  A cold front with steady winds from the north can keep birds grounded for days. Check a good hourly weather app (I use WeatherCAN, on PlayStore and the App Store) for the latest conditions.


The other major weather variable is precipitation; birds tend to stay put during a storm.  And sometimes, foul weather can precipitate the amazing migration phenomenon of "fallouts".  When large amounts of migrating birds encounter bad weather, they'll land on the first sheltering piece of land they encounter and wait, often feeding frantically, for better conditions.

I've been a birder for 30-plus years, and I have only experienced true fallouts a couple of times.  There is no experience that will prepare you for the sight of a multitude of jewel-like birds perched at eye level or lower, sometimes foraging on the ground, at your feet.


BirdCast is a very useful tool in tracking bird migration through North America into Canada.

Can I see migrating birds in the park?
Yes!  Colonel Samuel Smith Park is known in birding circles as a "migrant trap". Not only is it located along a prime migration route, the shape of the park itself (largely constructed with lakefill) acts as a natural funnel, encouraging tired, hungry birds to touch down, eat and rest in the varied habitats found there. Woodlands, dense shrubs, meadows, beaches and wetlands all provide ideal places for the birds to pack on some weight before continuing further north--leaving behind those species which stay and nest there. 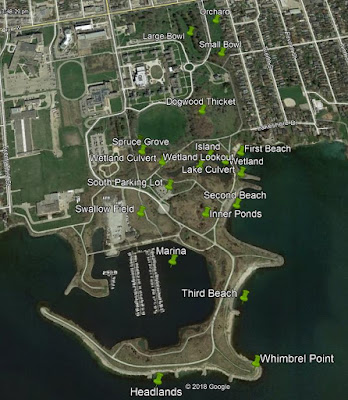 The Friends of Sam Smith Park are finalizing an updated park map, with input from all, that identifies prime birding areas, such as:
The Dogwoods
Large Bowl/Small Bowl
Wetland Lookout
Swallow Field
Whimbrel Point


What is the best season to see migrating birds?


Songbirds and other migrants begin moving through Toronto in March, with the peak around the second week of May and numbers tapering off by the end of May. Whimbrels, long-distance migrant shorebirds, have a short migration "window" from May 18 through May 31.

What is the best time of day to see migrating birds?
Some people may groan in protest at this, but early mornings are simply the best time to see the most species in the highest numbers at the peak of their activity. Hungry birds that have just arrived need to eat and pack on body fat to fuel the rest of their journey.  There is another burst of activity in late afternoon, but I will attest that getting outdoors in time to experience the "dawn chorus"--an incredible variety of newly-arrived birds all flitting about in the trees at the same time, filling the air with their songs--is utterly worthwhile.  Midday, on the other hand, is sleepy-time for many bird species.

Tip #1:
On cool, frosty spring mornings, the insects that songbirds depend on are often close to the warmer ground, so the birds may be down low and easier to spot--and often on the sunny side.  On warm mornings, insects move up higher into the treetops, and the birds follow, creating afflictions such as "birder's neck" or "belly shot photo".

Tip #2:
In breezy or windy conditions, migrants--and insects--will tend to congregate on the leeward side (protected from prevailing winds) of peninsulas or woodlands.

Guide to Spring Arrival Dates in Ontario
This extremely useful chart was carefully compiled using eBird frequency graphs by Mike Burrell, originally published on his blog.  Even going by my own observations in the park for 10 years, I have noticed that these average arrival dates generally hold true year to year. To capture the majority of songbird arrivals, the list includes March 14 through May 20.

*these species are barely calculable due to a pretty weak peak

Stay tuned for SONGBIRD MIGRATION: PART 2 for a pictorial guide to some of the species that pass through Colonel Samuel Smith Park.

Acknowledgements to the Cornell Lab of Ornithology for their valuable resources, and to Mike Burrell for his arrivals chart.  Read the entire article here and check out his new book with Ken, his brother: Best Places to Bird in Ontario.