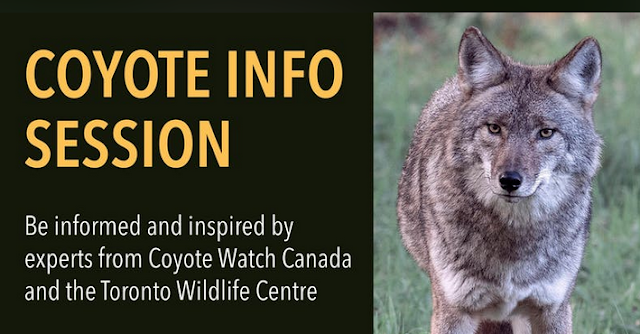 I attended the Coyote Info Session (December 3) at Mimico Library. There were approximately 40 people in attendance--mostly dog owners.

Eric Code was emcee. He introduced speakers from the Toronto Wildlife Centre (www.torontowildlifecentre.com) and Coyote Watch Canada (Ann Brockelman) (coyotewatchcanada.com). Both speakers were excellent. MNR biologists were also in the audience.

1. Feeding coyotes is the #1 problem. Food is often left by "good Samaritans" who believe they are "helping" these animals. Baiting has also been done by some irresponsible photographers.  If anyone finds food left in the parks, remove it immediately and report the incident to TO Animal Services or 311 (with photo if possible). Individuals have been charged upon investigation.

2. All dog poop and errant treats should be picked up in both regular parks and inside the dog parks. Coyotes eat poop and also use it for determining such things as if there are any intruders in their territory, if there are any female dogs in "heat", etc. If you find an area with large amount of dog poop, contact TO Animal Services or 311.

3. Dogs should be on leash unless they are in the dog parks. Coyotes are curious and may feel threatened (especially if they have a den and youngsters in an area). They may appear to be stalking people/dogs, but most likely are simply trying to determine if there is any danger in the situation for them.

4. Never chase a coyote during the spring "denning" season. They can become so frightened that they will abandon their den and any pups will not survive. Never scream at a coyote--rabbits make a screaming sound and this only attracts coyotes.

6. If you ever feel threatened, never turn your back and never run from a coyote. Face the animal with your hands in the air and try to make yourself look as big as possible.

8. There is no proof that the dead red fox recently found in the park was killed by a coyote. Its body was removed within two hours of discovery and an investigation could not be conducted.

9. Coyote pups suffer a 70% mortality rate in their first year. They are often killed by Great Horned Owls.

10. Dogs should be spayed/neutered. Cats should be kept inside as they are similar in size to rabbits, skunks, etc. and are considered an alternate source of food for the coyote. Keeping cats inside also reduces the number of wild birds that are killed each year by errant house cats.

11. Human food is very detrimental for coyotes. Teeth rot and the animal loses its ability to catch natural prey.

12. It was suggested that all park users' cell 'phones list the number for the TO Wildlife Centre for quick use if an injured or in distress animal is observed: 416 631-0662.

13. The reduction in deer numbers in the parks is NOT due to traveling packs of ravenous coyotes. Unless a deer is injured or emaciated, coyotes present no danger.

14. In the "you can't make these things up" department, the TO Wildlife Centre speaker talked about a woman who called their office to ask if it was OK to leave her 11-month old baby alone outside in her back yard while she went into her house to do some chores. She was concerned the child might be attacked by a coyote. It was suggested that, perhaps it was not a good idea to leave a baby alone outside under any circumstance!