There have been recent reports of coyotes in Sam Smith Park.  Two days ago a coyote was observed being chased by two unleashed dogs.  This article may be useful for park users as well as following the link at the bottom for more information.

Coyote Watch Canada director Lesley Sampson was among the presenters during a city-hosted coyote information session at the Etobicoke Olympium on Thursday, April 12 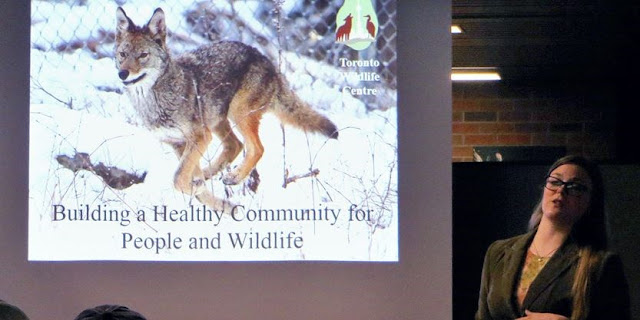 From a reputation for stalking and luring, to inflated reports of attacks — guest speakers at last week’s city-hosted coyote information session in Etobicoke helped dispel some of the myths about the ofttimes misunderstood canid.
“With public education, we’re trying to teach people how to peacefully coexist with their wild neighbours — especially coyotes, which get a bad rap,” Sara Bowman, a public educator with the Toronto Wildlife Centre, told a packed crowd at the Etobicoke Olympium last Thursday, April 12.
Among the coyote misconceptions that Bowman and her fellow speakers disputed were that:
1) Coyotes “stalk” people as prey.
Not so, said Lesley Sampson, director of Coyote Watch Canada. If a coyote appears to be following you, it’s not because it sees you as food so much as it thinks you might feed it.
“If someone else has been feeding them, coyotes will sometimes follow you expecting you to feed them, too,” she said. “That’s why we always tell people to never, ever feed coyotes.”
2) Toronto is home to “coywolves” — a larger hybrid descended from coyotes and grey wolves.
Despite popular opinion, this one is also false, said Bowman.
“First of all, I don’t like the term ‘coywolf’ — it makes it seem like they’re sneaky like a coyote and strong and aggressive like a wolf,” she said, noting that, regardless, all coyotes found in the Toronto area are eastern coyotes.
“They may look big (like coywolves), but they’re just really, really fluffy, and they have real tall legs, which makes them look a lot bigger than they are. In reality, they’re, like, 30 pounds soaking wet.”
3) Only sick coyotes are seen during the day.
“This is absolutely not the case,” said Sampson, noting that while most coyotes hunker down between dawn and dusk, their daylight slumber is often impacted by food availability and habitat disruption.
“I once had a coyote family with five pups that we were researching, and the father would go out hunting during the day. He had five hungry mouths to feed, so he would cross a busy road every day to hunt,” she said. “He was not sick, he did not have mange — he was just feeding his family, because he was a dedicated father.”
4) Coyote attacks on humans are common.
“You’re more likely to die of a lightning strike, drown in your bathtub, or get hit in the head with a golf ball than you are to be scratched, let alone bitten, by a coyote,” Bowman disputed.

In fact, while the city receives between 1,000 and 1,400 reports of dog bites every year, Bowman said there has been only one instance of a reported coyote bite in Toronto in recent history — stemming from a "very unique" situation back in 2003.
As is so often the case with emboldened coyotes approaching humans, she added, the animal in question was being fed by a well-meaning, yet ill-advised local resident.
“The coyote was injured and hobbling around on three legs, so this person began feeding it a boiled chicken every day,” she said, noting that, soon after the feeding began, the coyote reportedly began "nipping" at joggers in the park.
5) Coyotes “lure” domestic dogs back to their dens.
“Does it make sense to you that a family-oriented coyote is going to offer up their partner or their pups to attract your dog? No,” said Sampson.
Instead, what’s most often happening in these reported cases of dog “luring,” she explained, is that domestic dogs — many of whom are illegally off-leash — are giving chase to coyotes, and the coyotes are simply running back home to safety.
“Just like my daughter would run home to find protection if she was being chased, that coyote is going to run back to its family — and then an interaction might occur,” Sampson said.
“But coyotes do not lure dogs. If your dog is off-leash and chasing wildlife, your dog is misbehaving and breaking the Fish and Wildlife Act.”

For more information about coyotes, go to https://bit.ly/2DFsDyu