Three years ago, on a sunny early June morning, I set out on a pleasant solo meander along the trails in Tommy Thompson Park, AKA the Leslie Street Spit.  The morning promised much; the grass was spangled with dew and the chorus of birds filled the air around me.  Most of the spring migrating songbirds had already passed through to their breeding ranges (except for a multitude of Cedar Waxwings) but there were plenty of birds going about the business of creating the next generation.  I saw already-half-grown Killdeer chicks and Canada Goose goslings grazing in the grasses.  Black-crowned Night Herons and cormorants competed noisily for nesting territory, while Great Egrets attended mates in full courtship finery.  Tiny Yellow Warblers and Common Yellowthroats sang loudly in thickets, fiercely fending off rivals.


As I headed out along a dyke to check for shorebirds in one of the large ponds, I spotted a family of Trumpeter Swans away over against the far shore.  I could see they had several cygnets and got excited, but they were too far away for photos.  I decided to sit down in the sunshine on the grassy dyke to take a snack break.  When I looked again, I could see the family of swans was headed across the pond in my general direction.  I think I dropped my protein bar and quickly stretched out in the grass, for fear of frightening them away.  I knew the cygnets were not far from hatching and probably hadn’t had any encounters with scary humans yet.

I couldn’t believe it—they were coming straight for my little spit of land.  The cygnets pulled out in front and, one by one, until FIVE downy babies waddled out of the water and started up the dyke.  The little ones were leading their much more cautious parents without hesitation, right toward me!

I pulled myself into a cross-legged position and sat quietly.  One of the adults stood back a bit, watching with a careful gaze, absolutely towering over me.  There was no mistaking who was boss in that moment!  The five cygnets actually settled down just in front of my crossed feet, nibbling at grasses, resting and preening, completely at ease and unthreatened.  I was a little dumbfounded by this sense of implicit trust they were demonstrating.

After a long while, the cygnets got up and slowly wandered back down to the shoreline, adults in tow, and off they swam serenely together.  I still didn’t move for a time, a little blown away by the gentleness of that encounter.  I knew that many Trumpeter Swans are banded, wing-tagged and tracked, and that some were fairly habituated to humans, and in fact I have even hand-fed a tagged Trumpeter Swan at LaSalle Marina since then.  But these were untagged, unbanded, and this somehow made the encounter even sweeter. 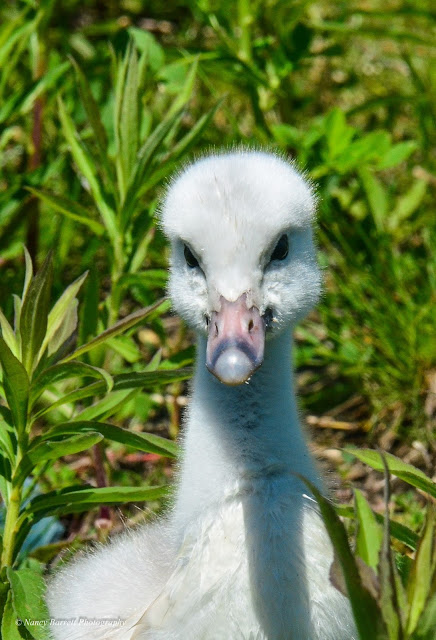