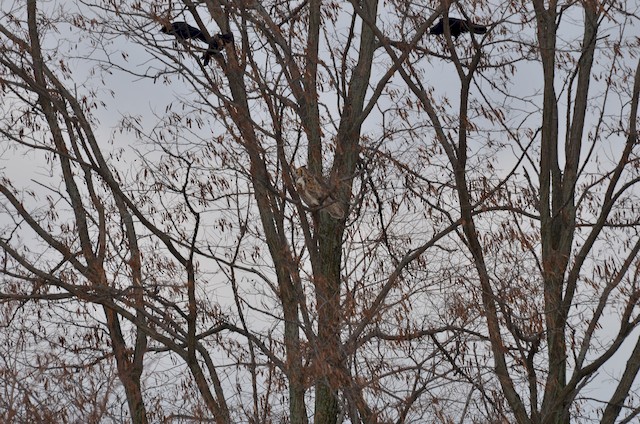 Yesterday, Dave Pryor posted on E-birds this image of a Great Horned Owl he found in Sam Smith Park. This is an uncommon visitor to the park.  He observed it being mobbed by a group of raucous American Crows which is a very common behaviour when these two species encounter each other.

“Mobbing” is a defensive action intended to alert others to the presence of a predator or drive it away.  Many species exhibit this behavior, so it must have great survival value - crows mob owls, blackbirds attack crows, and chickadees scold jays. Mobbing seems to signal this message: “We see you. You can’t surprise us, so leave because we’re going to harass you until you do.”


The crow mobbing ritual is predictable:  One sounds the alarm.  Another arrives to do the same. Then, many more fly in, often from a considerable distance.  Some dive at the owl while others leap from their perches in agitation. The din continues indefinitely and with greater intensity if the owl moves. New combatants arrive as veterans leave, but eventually their numbers thin and the racket subsides.  This exhibition of a cooperative defense behavior is an example of the crow’s high intellect.