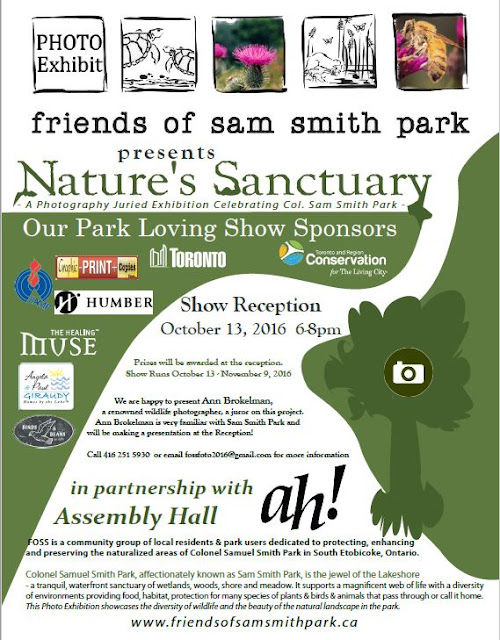 We're getting closer to the opening of Friends of Sam Smith Park's first galleried photography exhibit featuring submissions from members and others who appreciate the beauty of the park.

It is a juried exhibit called "Nature's Sanctuary" and it opens at the Assembly Hall on Thursday, October 13th and will close on November 8th.  The show reception starts at 6 p.m. and there will be light refreshments.

Sixty-nine entries, including youth submissions, have been selected for the exhibit . There will be first ($150), second ($100) and third place ($50 gift certificate) prizes as well as other "honourable mention" prizes - winners will be announced on the opening night.

We would like to extend a great big thankyou to our sponsors listed on the poster.  Without them, this event would not have been possible.

The show reception will feature a presentation by Ann Brokelman on wildlife photography.  Ann is a renowned nature photographer who is very familiar with Sam Smith Park as well as other Toronto parks.

Ann, along with Gordon Roy, a local artist, was one of the jurors for the exhibition.  (Their bios can be seen below).

During the exhibit, Friends of Sam Smith Park will host an exciting, free evening event on Thursday, October 20th. at 7 p.m. with talks by Tim McCarthy from the Toronto Ornithological Club on Whimbrels and Andrew Keaveney, a well known local birder and naturalist, on "Urban Waterfront Parks: the Importance of Colonel Sam Smith Park to Wildlife".  (Their bios can also be seen below).

"I can honestly say that when I’m looking at the natural world through my camera I’m not thinking about getting the perfect photograph. While I love a good picture, I’m far more interested in my subject’s behaviour, expression, health, colour patterns and details, and so much more.


My love of nature started as a child. My parents took my brother and I camping and hiking all over Ontario and I developed an early appreciation for our province’s natural beauty. For as long as I can remember I’ve enjoyed being outside and while I’ve only become quite professional and proficient in this last decade, I’ve had a passion for photography since I was a teenager. In particular I enjoy observing and listening to birds of all shapes, sizes, and sounds. I’ve also tried to pay back nature for all the joy it’s given me by volunteering for the Toronto Wildlife Centre, The Owl Foundation, and Coyote Watch Canada. I’ve also tried to spread my love and knowledge of the animal world by writing articles for Beach Metro News,  On the Wild Side, and for the City of Toronto, Ann’s Corner. I’ve been honoured by having my photos featured in many books, poetry collections, children's stories, educational materials, magazines such as Wild Birds and Birds and Blooms, as well as in flyers, newsletters, and the Toronto Star. My work has been used across Canada and in Europe, the USA and even in Africa.


I really believe that every day offer an amazing discovery, if you’re willing to keep your eyes open. Some days I may find the subtle beauty in a fence post covered in spider webs and morning dew and other days I’ll take in the more obvious magnificence of a 10 point buck lying under a tree. Never stop enjoying both the big and little things nature continues to offer us, and I’ll see you outside!"

Gordon Stewart Roy was born in 1953, raised in the Village of Long Branch and continues to make his home and studio by the shores of Lake Ontario.  Growing up around nature, Gordon was inspired to take up art at an early age. Self-taught, Gordon has honed his talents to great heights and for more than 40 years has had a successful commercial and fine art profession including painter, sculptor, muralist, wood carver and multi-media visual arts instructor.


Gordon’s works have been displayed in numerous art exhibitions as well as juried art shows.  In addition, he has facilitated many exhibitions. 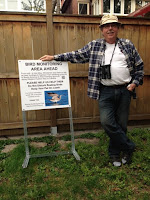 "I've been a birder since I was 4. But I'm interested in all of nature. The skills one develops in birding, i.e. learning to see and hear like an animal or a hunter can be useful in life. I enjoy teaching that. I also enjoy teaching the love of nature to newcomers of all ages especially kids. My intensive birding while I was employed consisted of an annual pilgrimage to Point Peelee. Now that I'm retired with time to spend I enjoy doing the Whimbrel Watch at Sam Smith, the Raptor Watch in High Park, bird counts at Carden, volunteer work for the Canadian Peregrine Foundation and, well, anything that I feel like doing." 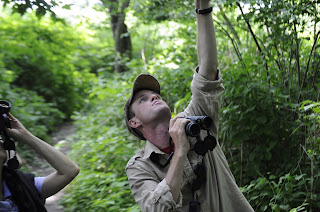 Andrew grew up in the south Etobicoke area, a snippet of the now Mega City of Toronto. He spent most of his free time biking and hiking among the community's parks and ravines. He became a part of the local organization CCFEW (Citizens Concerned about the Future of the Etobicoke Waterfront) at an early age, and was a regular on their bird walks, which he now occasionally leads. He began to meet local naturalists who would introduce him to their world of birding, and it was through these connections that he became a member of the Toronto Ornithological Club (TOC), the Ontario Field Ornithologists (OFO), and Bird Studies Canada (BSC). With both parent’s teachers, he found the time on weekends and during summers to explore the Bruce Peninsula from their cottage hideaway. Skip a few years and Andrew now has a Biological Sciences degree from Guelph University, and a teaching degree (Science, Geography and Outdoor Education) from Queen's University, experience from 3 naturalist positions in Ontario Parks, and biological consulting, field guiding, and field biologist volunteering experience in 6 states, 3 provinces, and 7 countries. And with the natural and cultural history of 30+ countries under his traveling belt, such as Ecuador's Galapagos and Burma's temples of Bagan, he continues to be enlightened by all things wild.

**** Friends of Sam Smith Park will also have on display at the exhibition the latest drawing from Alan Li of a Belted Kingfisgher.  (This bird is frequently seen in the park hunting over the large wetland pond).  Alan will have prints for sale and part of the proceeds will go to our organization as well as FLAP.


A Little Bit About Alan... 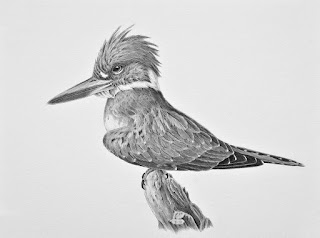 Alan Li is an artist focused on nature.  He supports conservation efforts through the sale of his artwork and is active in volunteering.  Alan believes that drawing can open people’s eyes to the planet’s wondrous diversity, and show them that it matters.
Alan grew up near the Niagara Escarpment (a UNESCO Biosphere Reserve) and spent much of his childhood exploring the cliffs and forests.  Those early encounters with nature have influenced both the direction of his life and choice of subject matter for his art.  He currently pursues his own projects, teaches workshops and collaborates with grass-root environmental groups
No comments: