WAS THAT A PAINTED TURTLE I SAW IN THE POND OR AN UNWELCOME INTERLOPER? 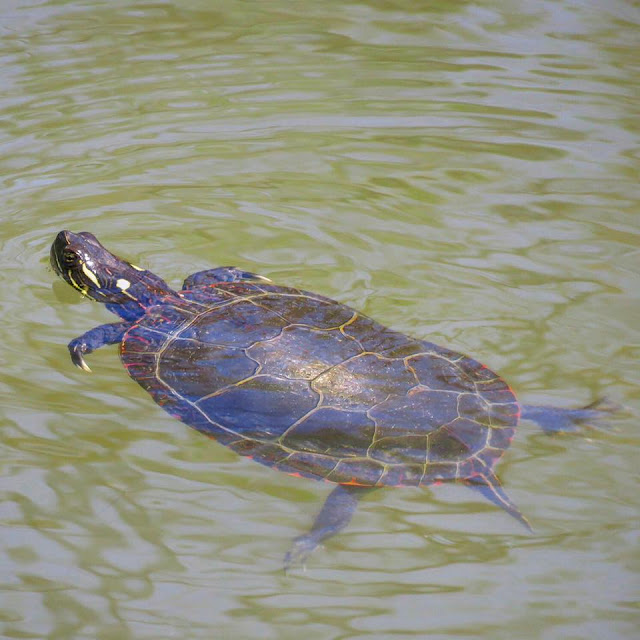 This great image of a Painted Turtle seen in the large pond was sent to FOSS recently.

In Sam Smith Park you can also see another turtle very similar to the native PaintedTurtle called the Red Eared Slider. There are also Snapping Turtles in the park and we get the odd, unverified report of a Blanding's Turtle being spotted. For more on the park's snapping turtles, check out a previous FOSS post.

Red-Eared Sliders are not native to this region but are releases of pet store turtles that, once the “cute’ stage has passed, invariably present a number of pet care challenges. They’re very appealing and they seem like the kind of simple pet that you can keep in a nice tank, toss food at once in a while and that’s it. 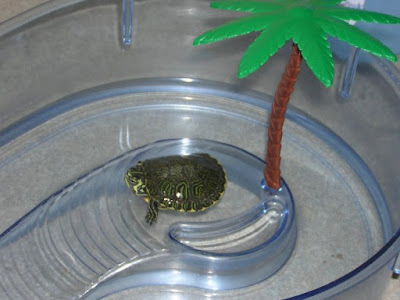 They tend to sit - hence their long lives. Contrary to what many children and their parents thought after seeing the Ninja Turtles movie, they do not hop, skip and jump through the air! This can be a huge disappointment for a child who believes his turtle has magical powers, but sits there like a log.

They can live for decades and grow to be a foot long. That's a lifetime responsibility that many people are not prepared to meet. Buyers are generally not told that when that little turtle grows up it will be big enough to need a very large aquarium with appropriate temperature control.  They can grow up to seven pounds and need a 200-gallon tank to live in!

Because turtles are messy eaters and produce a lot of waste, they, how can we put it, have a “dynamic bio-load” (read: lots of extremely smelly and gooey poop) that needs to be filtered and cleaned frequently.

However, millions continue to be sold as hatch-lings in the North American pet trade.


Of the few that survive to adulthood and do not perish because of inadequate diet, they are often released in to ponds where many succumb to winter kill.  They are native to the southern USA and are not well adapted to our climate.  Most ponds across Ontario do not completely freeze to the bottom during "normal" winters.  There usually exists an area of water beneath the ice which is oxygen-rich.  But, as winter progresses, particularly during harsh winters, small wetlands can completely freeze.

Many do, however, survive the winter and grow to full adulthood.  (Chances are pretty good for native turtle species because they are specially adapted to survive without oxygen for extended periods of time.  They can alter their metabolism and can remain submerged for up to 3 months with zero blood oxygen.)
Beyond Red-Eared Sliders being ill-equipped to deal with Canadian winters, there are other reasons why it is not wise to release pet turtles into the wild

Although not yet absolutely conclusive, pet store turtles most likely carry diseases that can affect native turtles and the entire ecosystem.  They also compete with native turtles for food and unnatural hybridization with closely related species is another potential problem.

It is very easy to misidentify these two lookalike turtles.

Red-Eared Sliders should not be released into the wild. Sliders that are found in the wild can be taken to adoption centres, thereby helping our native turtles. Here is a place to try in Toronto ....
http://www.littleresq.net/

I have seen several Midland Painted Turtles and Red-eared Sliders and one Snapping Turtle. There is also one Yellow-bellied Slider in the pond.