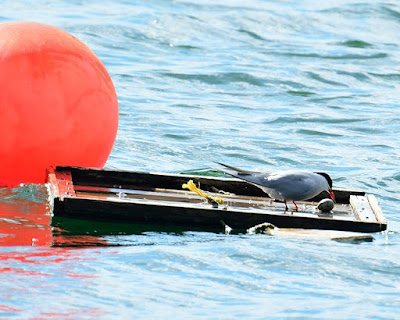 We just received a photograph of a pair of Common Terns on an unused grebe nesting platform with what appears to a tern egg.  This is not the first report we have had of terns showing a decided interest in the platforms as a potential breeding site.
It just so happens that a few days ago we let the Conservation Authority know that terns had been checking out one of the grebe platforms in the marina.  We had been wondering if the installation of a larger nesting platform for these colonial breeders might be a worthwhile idea for Sam Smith Park.


There is a very successful one in Tommy Thompson Park. 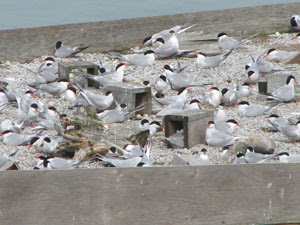 We were told that it would not be feasible because of the close proximity to the yacht club.  A large number of these birds can be messy and boaters and terns don't usually make good neighbours.

Assuming that the egg belongs to the terns, and it certainly looks like it, they might have other ideas about that!

Here is part of TRCA's response to our inquiry ....

"Sam Smith is (not) a good candidate for a large tern raft due to the potential for conflict.  It would need to be located in a sheltered area, so really the only option is the yacht club basin.  (We) are concerned that this would result in conflict with the LSYC given that there could be up to a hundred terns on the platform who also like to perch/loaf on boats and leave their droppings behind. Unfortunately terns and marinas/boat clubs don't mix."