TREE SWALLOWS ARE BACK! YES, THERE WILL BE A SPRING! 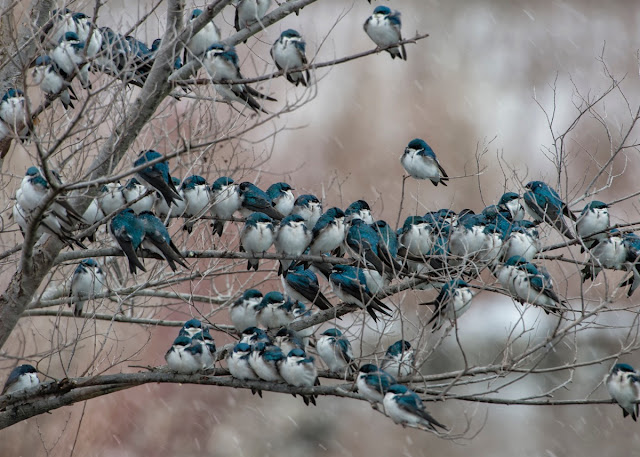 Tree Swallows are now turning up in Sam Smith Park to claim nesting boxes.  This cold looking group of early arrivals was photographed by Peter Wade last week in a tree close to the park’s Swallow Field (immediately east of the yacht club).

One reason that Tree Swallows are able to return so early and get their nests built and eggs laid before the other swallows return is that they don’t go that far south for the winter, staying in Mexico and Central America as well as the Caribbean, but not venturing very far into South America. The Barn Swallow, for example, winters as far south as the southernmost tip of South America.

Unlike other swallow species, Tree Swallows can eat plant foods (berries and seeds) as well as catching their normal insect prey on the wing.  This helps them survive the cold snaps and wintry weather of early spring.  It is estimated that 20% of their diet is plant material. 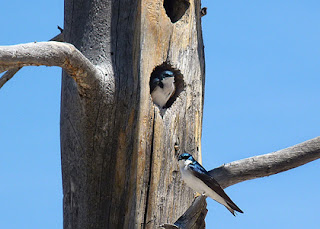 Tree Swallows are cavity nesters and, prior to settlement, they used old woodpecker holes, often in dead snags around beaver ponds. Those opportunities are much more scarce nowadays.  Add that to habitat loss in their wintering grounds as well as the fact that all "aerial insectivores" that specialize in feeding on flying insects are experiencing population declines as their food sources diminish for a host of different reasons (click here for an explanation) and you see a delightful bird species in need of some help.  However, like the bluebird, they will nest readily in man made nest boxes. 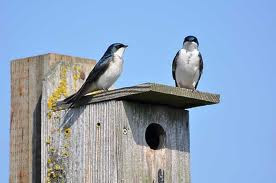 Friends of Sam Smith volunteers have installed 45 nesting boxes to date in the park and we clean, sanitize and repair them each spring.

If you notice some boxes missing from last year’s locations, it is because we are in the process of moving most of them to the Swallow Field.  The swallows prefer open nesting areas and are not as stressed if their boxes are away from shrubbery and there is appropriate space between them.  We intend to install another ten boxes in the Swallow Field after they are built this May at the Spring Bird Festival.

Did you know that we have four species of swallows that breed in the park - Tree Swallows, Barn Swallows, Cliff Swallows and Rough Winged Swallows?