Spring Bird Hikes for Beginner Birders
Have you wanted to get started in the fun and exciting hobby of bird watching but were not sure how to begin? We are here to help you. Spring migration is ramping up, many of our local birds are returning to the area while others are passing through. Now is the time to start wandering the local hot spots to get a look at the birds in their spring finery.
Wild Birds Unlimited has hikes planned through the peak weeks of migration. We will be birding one of the local birding hot spots, Colonel Samuel Smith Park.
The staff of Wild Birds Unlimited will be leading the hikes. Kyle and Jesse will be our main hike leaders supported by Barb, Lynda and myself.To learn a little more about Kyle and Jesse check out their bios.
.
Hike Details

"Beachcombing: Glass, Bricks, Rocks and Sticks on the Etobicoke Waterfront."

Beachcombing is the practice of searching a beach for things of value, interest or utility. The shorelines of Colonel Samuel Smith Park contain many clues about the natural and cultural history of the park, and its importance for wildlife and migratory species. Join Jimmy Vincent from Humber Arboretum and Janette Harvey from the City of Toronto to explore the connections between the built and natural environment along the Etobicoke waterfront. The walk ends at a community planting event (see below) – feel free to stay and plant native wetland and pollinator species.

As part of a larger habitat improvement project underway in the park, we are planting native wetland plants. Bring rubber boots or waders, and come prepared to get a little dirty. Parking is available at the south end of the park. Follow the signs to the planting site.Hosted by: Humber Arboretum, Citizens Concerned about the Future of the Etobicoke Waterfront (CCFEW), Friends of Sam Smith Park (FOSS).
UPDATE: THIS EVENT IS ALMOST AT CAPACITY. NO MORE LARGE GROUPS WILL BE ACCEPTED FOR REGISTRATION
Click here for more information (map etc.)
No comments:

SAM SMITH IS ONE OF "THE MOST BEAUTIFUL PLACES IN TORONTO", ACCORDING TO 'BLOGto'.

"The most beautiful places in Toronto tend to be on the waterfront or part of our stunning ravine system, but despite the ever increasing density of the city, you can also find pockets of beauty in the heart of downtown. Toronto remains blessed with ample green space and excellent access to the lake on the east and west sides of the city." 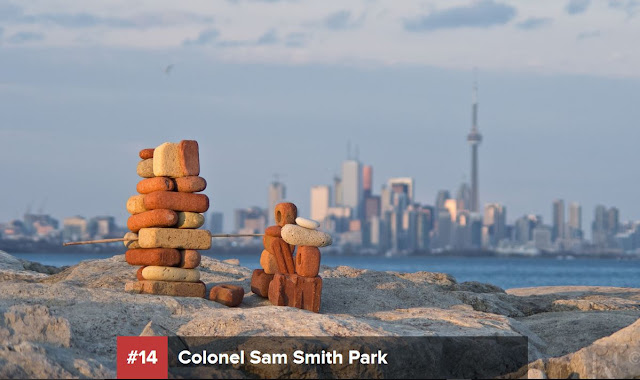 
There are many Mute Swans in and around the park and a pair have built a nest at the wetland viewing area.  Some park visitors have heard that the eggs will be oiled to prevent them from hatching and wish to know the reasons behind this policy.  Here is TRCA's explanation.

"Toronto and Region Conservation, in partnership with the City of Toronto and with support from the Canadian Wildlife Service (CWS), have been managing Canada Geese and Mute Swans under CWS permit in the GTA for over 16 years. Mute Swan Management programs are also commonly practiced in many parts of North America.

Mute Swan management is being undertaken because Mute Swans are not native to North America and their population has been steadily increasing over the last decade, as they appear to lack significant natural predators.  They cause significant damage in natural habitats; they displace and disrupt native waterfowl and other wildlife species that are less common and more sensitive to disturbance; and they can be very aggressive toward people.  Mute Swans also seriously affect the lengthy and costly shoreline and wetland restoration work that has been completed along the Toronto waterfront. 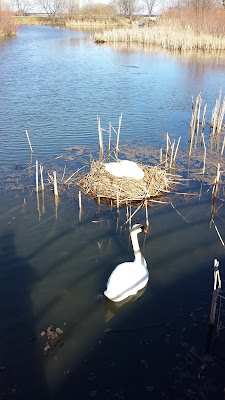 Typically with the Mute Swan Management Program, eggs are sprayed with mineral oil to prevent egg development and re-nesting, but in some cases the nests are removed because of the public’s interaction with the swans and the high probability of human/ wildlife conflict concerns. In some areas along the Toronto waterfront many people have been observed feeding the swans, and even have gone to such lengths as providing nesting material to build nests in highly developed areas. This is the root cause of the problem and is altering the swans natural behaviours and causing them to be attracted to nesting in unnatural areas.  Wildlife that becomes dependent on humans often results in conflicts between humans and animals. 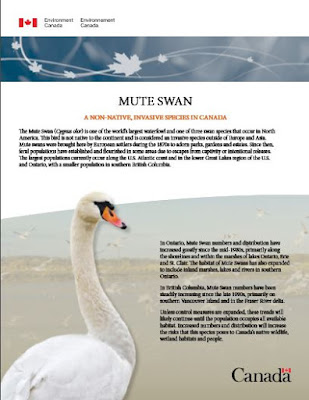 Our management approach is well thought out. All eggs are float tested before nests are oiled or destroyed by briefly immersing the eggs in water (as per the US Humane Society protocol).  The float test helps determine the age of the egg, so that management is undertaken ethically.  If a float test shows positive development, eggs are not removed or oiled.  We monitor specific areas every two weeks during the nesting season for Canada Geese and Mute Swan nests, so development of any eggs is unlikely.


The Mute Swan Management Program will not affect the existing opportunities for public viewing or appreciation of these birds; however, it will slow the ongoing population increase and distribution of the species into other waterfront habitats that are currently occupied by native species.  Furthermore, it is important to continue the current management program as it has proven to be effective in mitigating the local population increase with minimal cost and effort."

Please note that the Mute Swan management programme is carried out by the Toronto Conservation Authority who have jurisdiction over wildlife management along the waterfront.  This is NOT an initiative of Friends of Sam Smith Park.  Please address any concerns directly with TRCA.

Follow this link to an Environment Canada fact sheet on the Mute Swan.