A new wetland lookout at Colonel Samuel Smith Park is the latest extension of a successful outdoor education program in the rare, naturalized waterfront park.  “The old one was leaning and had been burned,” said Barbara Keaveney with Citizens Concerned About the Future of the Etobicoke Waterfront. “The railing was coming off. Kids’ programs go down there. It was in quite a state of disrepair.”
Keaveney also sits on the park’s stewardship organization, Friends of Sam Smith Park (FOSS).
“The jewel of the Lakeshore – a tranquil, waterfront sanctuary of wetlands, woods, shore and meadow,” is how FOSS describes the park.
The recently retired Etobicoke elementary teacher secured a Weston grant in recent years to develop an outdoor education program in the park. The grant also funded the new lookout. 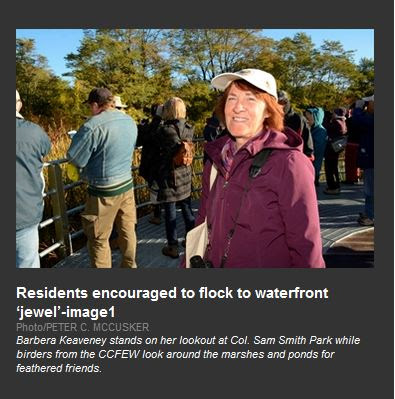 Four years ago, Keaveney reached out to Humber Arboretum staff to encourage them to offer their nature programs in the park. Last year, 1,800 local elementary and high school students took part. Half-day and full-day classes are offered.

Humber College supplies two classrooms to the program at its Lakeshore campus adjacent to the park.
“There is a whole list of topics teachers can pick based on the curriculum and grade,” Keaveney explained. “They can study whatever fits into what is in the park. It’s a perfect match. Humber Arboretum at Humber College in the north, and the park is at Humber College in the south.”
The arboretum books the program, and provides nature interpreters.
“It’s amazing how many people and schools are so close to that park and don’t get in there,” she said. “Once they go, that changes. The same people are coming back, and teachers are telling other teachers.”
Keaveney also helps organize CCFEW’s annual bird festival.
CCFEW’s bird checklist has boasted 197 bird species for many years. The list is comprised entirely of birds seen in the lakefront park.
In September, two new birds were seen – a scarlett tanager and a Cape May warbler.
“It’s pretty strange,” Keaveney said of finding new birds to catalogue. “But it’s kind of neat. It’s exciting. The whole point of the list is to know what birds are in the park.”
Last weekend, two more new birds were seen and catalogued – a Wilson’s Snipe and an American woodcock.
Residents are welcome to pull on their boots and participate in a tree planting in the park Saturday, Oct. 24 from 10 a.m. to 2 p.m. A ribbon-cutting ceremony at the lookout is also planned.
The focus, Keaveney said, is to get more people to appreciate Colonel Samuel Smith Park.
“Several people with CCFEW and a number of people on the walk really know birds,” Keaveney explained of CCFEW’s regular bird walks. “But about half the people now are from the neighbourhood who see the signs and just want to go for a walk.
“It’s about the park, not the birds. We’re really trying to get more people into the park.”