BURDOCK - A THREAT TO OUR PARK'S SMALL BIRDS 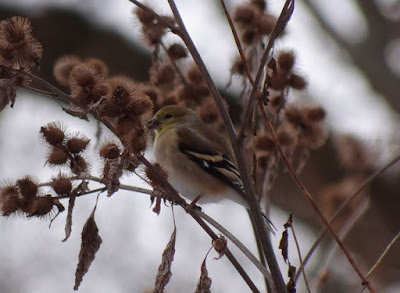 At this time of the year, small birds, especially goldfinches, get tangled up in burdock seed heads.


clinging burs that were not only the inspiration for Velcro - See more at: http://bcinvasives.ca/invasive-species/identify/invasive-species/invasive-plants/burdock/#sthash.Ba5FMBcO.dpuf
Goldfinches are accustomed to perching on the large heads to eat. As long as only their feet touch the burs they are okay, but, when feathers brush against a hooked bur, the small bird's strength is not sufficient to get free from the tenacious plant.  The plant employs a hook-and-loop system to latch seed heads onto passers-by for dispersal and was the inspiration for Velcro. 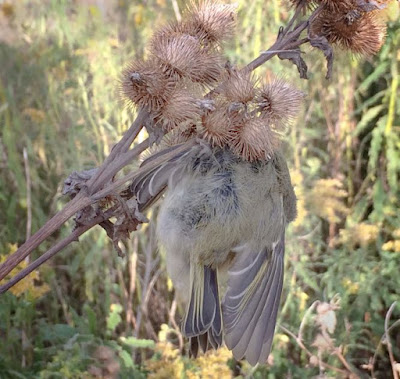 In many parts of Canada, burdock is considered a noxious weed and is eradicated where possible.  In Toronto, because of the danger to birds, there is currently a volunteer effort being organized by the Toronto Ornithological Club and TRCA to remove burdock.

We have some patches of burdock growing in Sam Smith Park, especially on the outer headlands near the beavers' winter lodge.  On your walks, keep a look out for trapped birds and please attempt to gently release them.