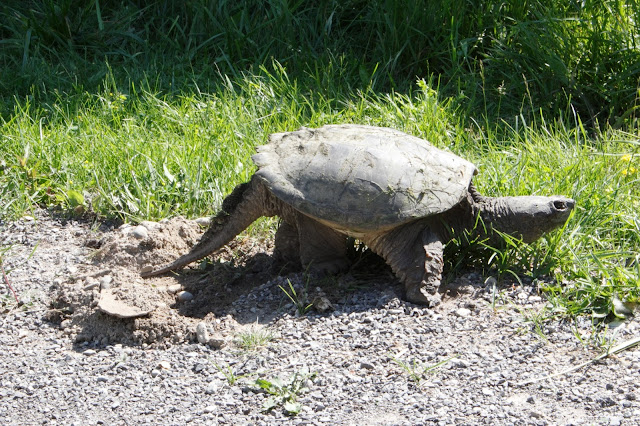 Yesterday, this Snapping Turtle was observed digging a nest in the gravel at the edge of a pathway.  According to observers, she laid upwards of 25 eggs and then covered them up (see photograph).


Incubation time is temperature-dependent, ranging from 9 to 18 weeks.  The sex of the offspring is also temperature dependent.


Ontario added them to the “Species at Risk” list in 2009 and their status is currently a species of “Special Concern”.


The Snapping Turtle is Canada’s largest freshwater turtle, reaching an average length of 20-36 cm and a weight of 4.5-16.0 kg. Snapping turtles have large black, olive or brown shells typically covered in algae. Their tails, which can be longer than their bodies, have “dinosaur-like” triangular crests along their length. Hatchlings are about the size of a loonie and are smaller and darker than adults, with pronounced ridges along the length of their shell.


They spend most of their lives in water. They prefer shallow waters so they can hide under the soft mud and leaf litter, with only their noses exposed to the surface to breathe


It takes 15 to 20 years for a Snapping Turtle to reach maturity. They are believed to live well over 100 years.  As a result, adult mortality greatly affects the species’ survival. During the summer, many turtles cross roads in search of mates, food and nest sites. This is risky for turtles as they are too slow to get out of the way of moving vehicles. Snapping turtles are also sometimes intentionally persecuted. Eggs in nests around urban and agricultural areas are subject to predators such as raccoons and striped skunks.