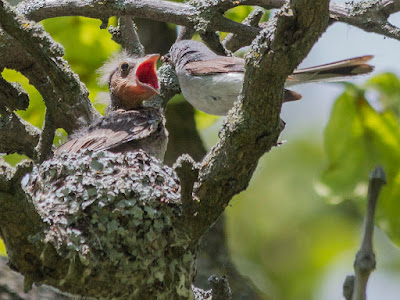 The Blue-Gray Gnatcatcher is one of the smallest regular hosts of the Brown-Headed Cowbird.  The Brown-Headed Cowbird is a “brood parasite” - it lays its eggs in the nests of other small perching birds, particularly those that build cup-like nests like the tiny moss and lichen Blue-Grey Gnatcatcher nest, and the imposter is then faithfully fed and raised by unknowing surrogate parents. Eggs have been documented in nests of at least 220 host species, including hummingbirds and even raptors!  The young cowbird is fed by the host parents at the expense of their own young. Brown-Headed Cowbird females can lay 36 eggs in a season.

Blue-Grey Gnatcatchers regularly breed in Sam Smith Park which is also home to many Cowbirds.  Cowbirds are often seen in spring in loud groups of males and females.  In the photograph above, recently taken by Brian Bailey in Sam Smith Park, a tiny Gnatcatcher is feeding a lone, enormous Cowbird chick which has almost certainly physically ejected from the nest the Gnatcatchers’ young. The cow bird egg will incubate and hatch in less time than most other birds, and when it hatches the baby cow bird will shove all other eggs or chicks from the nest. The parent Blue-Gray Gnatcatchers will not recognize the hatchling is not their own.


Imagine how angry, confused and sad the parents get when they realize the fledgling they spent all of their energy on isn't even their own!


Cowbirds get their bovine name from the fact that they were once known to follow herds of wandering buffalo (and then domestic cattle) in the grasslands of the central U.S. and Canada, eating insects that came to the surface after being upturned by hooves. Brood parasitism is a successful breeding strategy for birds that are constantly on the move.  As forests were cleared they
expanded eastward.  This species’ spread has represented bad news for other songbirds.  Heavy parasitism by cowbirds has pushed some species to the status of "endangered", particularly woodland warblers, and has probably hurt populations of some others.