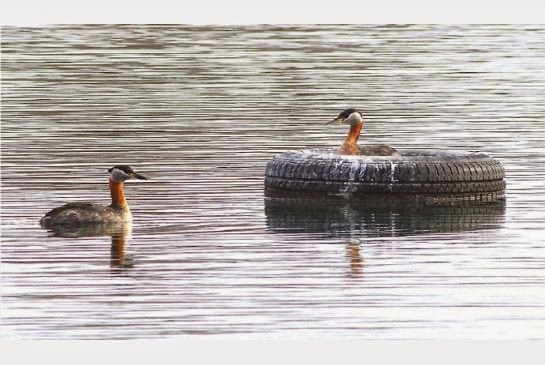 Toronto’s waterfront is a marvel in spring, and one of the best places to see the cycle of new life resume is at Colonel Samuel Smith Park at the foot of Kipling Ave.
There, a building boom is underway: recently returned songbirds are busy constructing nests, mute swans are checking out building sites and a family of beavers is diligently expanding and refurbishing its lodge.
But on a visit to this park on April 7, a day when the inner bay was still more than three-quarters covered with ice, it was the home-building efforts of a pair of red-necked grebes (Podiceps grisegena) that caught my attention.
These grebes, medium-sized water birds that look like something Picasso might have created if he had crossed a common loon with a red-breasted merganser, have elaborate, elegant courtship displays I’ve written about before.
But on this particular day, the pair I was watching had moved past courting and to the living together stage. Out in the bay, they were hard at work building a home for their future family, one carefully placed stick at a time.
There was a rhythm to their construction efforts. Dive, return to the surface with a stick in their beaks, swim to the nest and delicately, with military precision, place it on the growing woodpile.
There was only one problem: the two birds were building their nest on slushy ice at the very edge of the open water. A day or two of warmer spring temperatures would see the birds’ meticulously constructed home on the bottom of the lake and, with that, an inevitable delay in the race to reproduce.
Grebes have been around for 40 million years. How could eons of evolution not have imbued them with an instinct to build their nest in a more appropriate place? Perhaps these grebes were not the most perspicacious Podiceps in the pond. Could they be contenders for the Darwin Award, avian edition?
After some research into these questions back at home, I quickly learned that my judgment of this pair’s homemaking skills had been unduly harsh. Because their peculiar anatomy makes it difficult for them to walk on land, red-necked grebes normally build their nests in open water, where they essentially float, tethered to subaquatic vegetation. Perhaps the grebes at the park weren’t so dumb after all; their nest might simply float, anchored to plant life beneath the water’s surface.
There was only one way to find out. I waited for a week of warmer temperatures to melt the ice covering the bay and then headed back to the park last week.
It was a glorious day with spring’s fertile promise heard in the burbling song of the blackbirds in the marsh and smelled in the aroma of mud and the tang of lake water. Far out in the bay, long-tailed ducks yodelled and dozens of pairs of red-necked grebes whinnied, providing a contrapuntal top note to the scene.
I made my way to the place where I had seen the grebe pair building their nest on the ice. I was hoping to see their raggedy construction floating on the water. But there was nary a stick or decaying leaf to be seen. It seemed the birds’ building efforts had been in vain.
But all was not necessarily lost for this grebe pair. Pat Leonard at the Cornell Lab of Ornithology told me it’s not uncommon for floating grebe nests to be destroyed by wind or waves.
“Early nest failures are pretty common among this species and they are more than willing to try again,” Leonard said by email. “When nesting fails, grebe pairs will renest up to five times — until they get it right.”
He didn’t seem to be worried about a potential delay in the birds’ reproductive timetable, either.
“There is enough lag time between their arrival on the breeding grounds and the laying of eggs to accommodate these events,” he explained.
Leonard’s words came to me when I observed a grebe pair appearing to set up house only metres from where the ice nest had been. The birds seemed to be testing an old rubber tire for its fitness as a potential home site. I could see no plant matter sticking out of the tire, but perhaps it was there, just below my angle of view.
I watched a long time as the two birds — one inside the tire and the other outside — interacted, vocalizing constantly and touching their beaks together. At one point, the bird on the inside, the female, I think, raised herself up almost vertically, shook vigorously, then settled back down into the hole of the tire. It looked like she was laying an egg.
There’s no certainty, of course, that the tire grebes and the ice nest grebes were the same pair. But I have a strong feeling they were.
Whatever the case, I wish them luck in the reproductive stakes ahead. I’ll be back in a few more weeks to see if I can catch a glimpse of their zebra-striped hatchlings.