AMAZING MIGRATORY JOURNEY OF THE BLACPOLL WARBLER - LATE WOODLAND WARBLER THAT STOPS OVER IN SAM SMITH FOR REST AND FOOD. 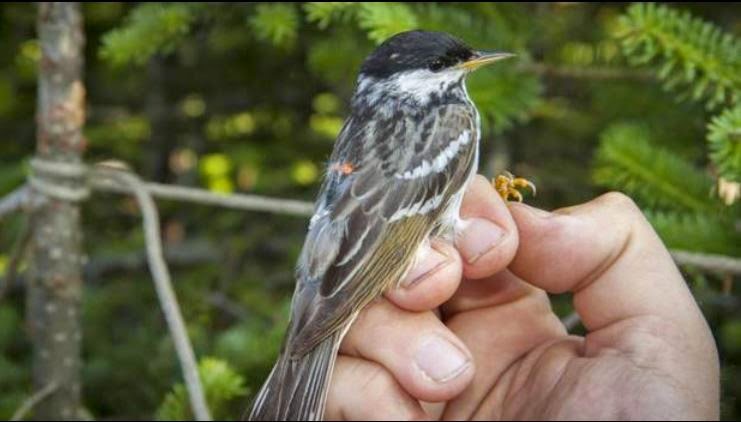 Tiny birds, even tinier backpacks, and a heck of a lot of air miles.
Those are the essential ingredients behind a Canada-U.S. study that appears to have convincingly solved a 50-year-old mystery while at the same time discovering one of the most impressive animal migrations on Earth.
The bird is the blackpoll warbler, a small but tuneful denizen of the boreal forest that can be found in summer months from Alaska to Newfoundland. The mystery has to do with how they get to South America every fall, where they overwinter.
Now, with the help of some clever technology, scientists have the answer: The intrepid warblers take the direct route, flying across the Atlantic for up to 2,800 kilometres at a stretch.
“The idea that a 15-gram bird can fly non-stop over water for days is astounding,” said Bridget Stutchbury, a professor of biology at York University in Toronto, who was not involved in the study. “It’s the first time anyone’s directly proven that that’s what these birds are doing.”
Researchers say the discovery is important not just because it is an ornithological record setter, but because it may indicate that habitat loss along their unconventional route or in their wintering grounds is the reason blackpolls are losing six per cent of their population each year.
It has long been suspected that the blackpoll – which get its name from the prominent black cap on 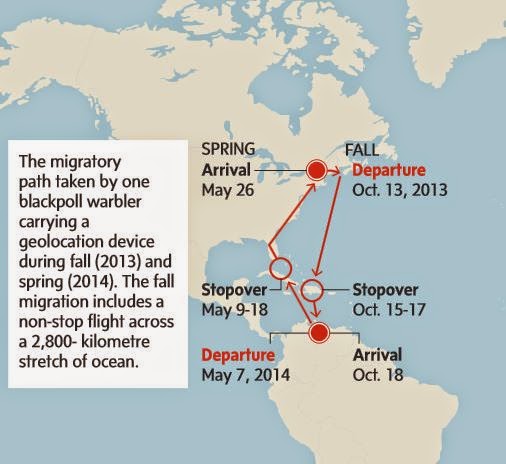 adult males of the species – is doing something unusual compared to songbirds of similar size. Like other warblers, blackpolls can be seen and heard moving northward every May, passing through the Eastern United States and Canada on their way to their northern breeding grounds. But come fall, it is a different story. Rather than retracing their spring route, the birds head east to New England and the Maritimes, where they devour enough insects to double their body weight in some cases.

At that point, “they disappear,” said Ryan Norris, an ecologist at the University of Guelph and the Canadian leader of the study, published on Tuesday in the journal Biology Letters. “There’s all sorts of sightings of them, and then there are no sightings, or very few.”
Eventually, the blackpolls reappear in Colombia, Venezuela and Brazil. Since the 1960s, researchers have speculated that blackpolls bulk up and make a straight shot across the Atlantic rather than take the longer, overland route. The idea was bolstered by stories of the birds showing up in Bermuda after storms or dropping in on ships at sea. But skepticism remained. No such migration over the open ocean had ever been demonstrated in birds so small.
The first chance to do so came in 2013, with the arrival of geolocator devices that are small and light enough for warblers to carry in specially designed backpacks. Bulkier versions have been used in earlier studies to trace the migration routes of larger species.
The devices can record only the passage of time and varying light levels from day to night. Yet, just like an 18th-century navigator equipped only with a ship’s clock and a sextant, the geolocaters use this information to compute latitude and longitude as an individual bird migrates.
“As soon as these little backpacks became light enough, we were out putting them on blackpolls,” Dr. Norris said.
The catch is that the geolocaters are too small to transmit their data. Researchers have to recapture the blackpolls after they return the next season to find out where they have been, a task Dr. Norris compares to searching for a handful of flying needles in a forest-sized haystack.
“The odds are somewhat daunting,” said Chris Rimmer, a conservation biologist and director of the Vermont Center for Ecostudies, which, unbeknownst to the Canadian team, was undertaking a similar experiment.
The two groups learned of each other and pooled their results. Of the nearly 40 birds they had collectively outfitted with geolocators in 2013, five were retrieved the next year. It was only a handful, but enough to show clearly that blackpolls use an ocean route in the fall. One bird that Dr. Norris’ group released in Nova Scotia flew directly to Haiti, nearly 3,000 kilometres to the south.
Other species are known to fly even farther, but as a ratio of body weight to distance, the blackpoll beats them all. Despite the risk of being so far from land, Dr. Norris said, the strategy has benefits, because it allows the warblers to avoid predators and it gets them to their wintering grounds faster.
At some point, Dr. Norris speculates, there were probably two populations of blackpolls, but, over time, the ones that chose the Atlantic flight had a higher rate of survival than their land-leaning cousins.
Dr. Stutchbury said she hoped the study would raise the profile of blackpoll warblers and lead to more concerted conservation efforts.
“These kind of discoveries give us extra respect for some of these little-known birds, and with that respect comes a responsibility.”