MIMICO, “MARTHA”, THE LAST PASSENGER PIGEON, AND US 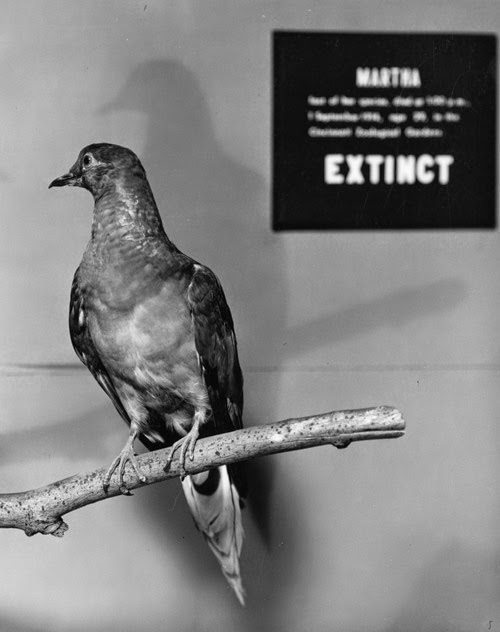 What is it that inspires people to care about the natural environment and the creatures who live in it, particularly when it comes to those nearby green sanctuaries so familiar to us?  Friends of Sam Smith Park members are “dedicated to protecting, enhancing and preserving the naturalized areas” of our park but understand that digging in and making it better here is just part of a much larger and vital picture.

Today marks the death of the last known Passenger Pigeon - exactly one hundred years ago.

“Martha” had lived her whole 29 years of life in captivity at the Cincinnati Zoological Gardens and died on September 1st 1914.  Immediately following her death, she was packed in an enormous 300-pound block of ice and shipped to the Smithsonian in Washington where her skin was mounted and displayed.  People lined up to see her. She was a “star”.


The passenger pigeon was once the most common bird on the continent, numbering in the billions (estimated at numbers exceeding 5 billion), consisting of forty percent of the continent’s entire bird population and thought to have been the most numerous species in the world. Passenger Pigeons lived in enormous colonies with sometimes up to 100 nests in a single tree. Migrating flocks stretched a mile wide, turning the skies black. 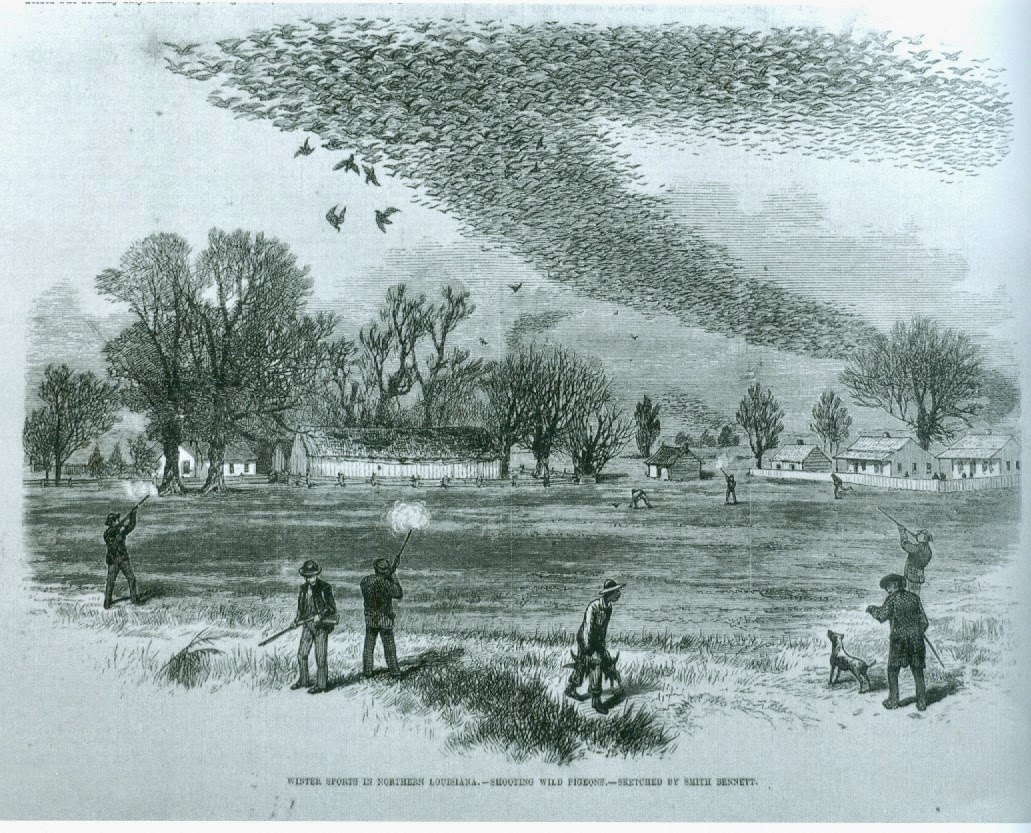 Unfortunately, they were considered pests that ate precious grain crops.  They were also tasty game, and were hunted both as sport and for the market. There was also the intense cutting down of eastern forests - their feeding and breeding grounds.   Their extinction was predicted in the 1870s, and was complete in the wild within about twenty-five years.  The Passenger Pigeon had gone from billions of birds to zero in about one century, probably less.


Their extinction is an important part of the largely untold story of the ecological annihilation of the continent in the latter half of the 19th century, a time that saw an unprecedented loss of natural beauty and richness as forests were felled and the prairies were ploughed, with wildlife slaughtered more or less indiscriminately. 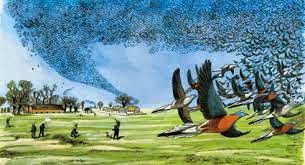 Nearby Mimico is a First Nations word for the area - Omimeca, meaning "where the pigeons gather".  The diversified hardwood and evergreen forest bordering Mimico Creek was a preferred and busy nesting place for the birds because of its abundance of seeds, nuts, berries and roots. Flocks would occupy many square kilometers within the forest. Every tree would have so many nests that their branches often broke under the weight of multiple young birds.  The migrating flocks were once so huge it was said that a single flock could darken the sky for up to three days and filled the air with the roaring sound of their flapping wings.   These birds were so plentiful at Mimico Creek that there were reports that dozens of birds could be felled with one buckshot.  Birds were often enticed by hunters to land in selected spots by attaching the legs of a blinded pigeon to a stool fitted with a lever that could be moved up and down causing the bird to flap its wings.  Unsuspecting pigeons would land to be netted, clubbed or shot by pigeoneers and then shipped off by the train loads to fancy restaurants in Boston, Toronto, Montreal and New York.  (This practice gave us the term “stool pigeon”.)  During the breeding season, squabs (young fledglings) would be tipped out of their nests with long poles and barreled up for shipping.  They were considered the tastiest. 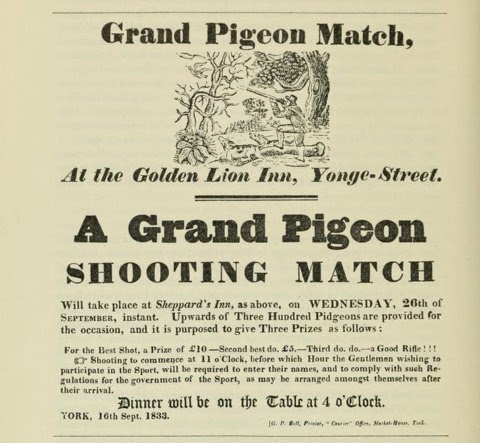 The annihilation of the Passenger Pigeon was the first “public” extinction, something people used to think happened only to relics of the past like dinosaurs and dodos.  It was a real wake-up call.


In 1897, the Ontario government finally included Passenger Pigeons in the category of "wild native birds" that qualified for protection. By then there were virtually none left to protect.


The last sighting of Passenger Pigeons in the Toronto area was reported unofficially in 1900, when five were observed flying over the Toronto Islands.  After several years of negotiations, the United States and Great Britain (on Canada's behalf) signed the Treaty for International Protection of Migratory Birds in 1916. In the following year, the Canadian Parliament passed the Migratory Birds Convention Act, which has played a key role in preventing the extinction of numerous other species of migratory birds.
U.S. scientists are currently using DNA from one of the dead birds from the large collection held at our own Royal Ontario Museum in an attempt to recreate the species.  This obviously controversial process could take eight or nine years but, if successful, would be the first time that a truly extinct species was revived.  When asked why, a researcher said the move is “partly to make up for the mistakes of the past” and she felt that something had to be done about a world on the verge of mass extinctions. Reviving some long-lost species may offer “a type of justice for what we’re doing now” and also teach people “it’s so much easier to keep something alive than to bring it back to life.”

Despite the underlying theme of loss in Martha’s story, it is more than another depressing tale of human greed and ecological stupidity. It contains an underlying message – that we need to re-forge our relationship with the natural world. Otherwise more species will go the way of the Passenger Pigeon.

We should listen to the message from Martha.

NOTE:  There is a terrific book published this year by naturalist Joel Greenberg who relates the story of the Passenger Pigeon in gripping detail.  It is titled “A Feathered River Across The Sky” and is available from the Toronto Library.