OWLS IN THE PARK

It looks like the predicted "snowstorm" has started.  There have been many reports of a first year male Snowy Owl (or Owls) being seen in the park in recent weeks.  Three different birds were supposedly seen today.  This night-hunting bird(s) is usually seen safely roosting by day on the yacht club dock.  Occasionally Snowy Owls can be found on the rocky headlands, but, with the sharp increase in unleashed dog traffic, that happens rarely now. 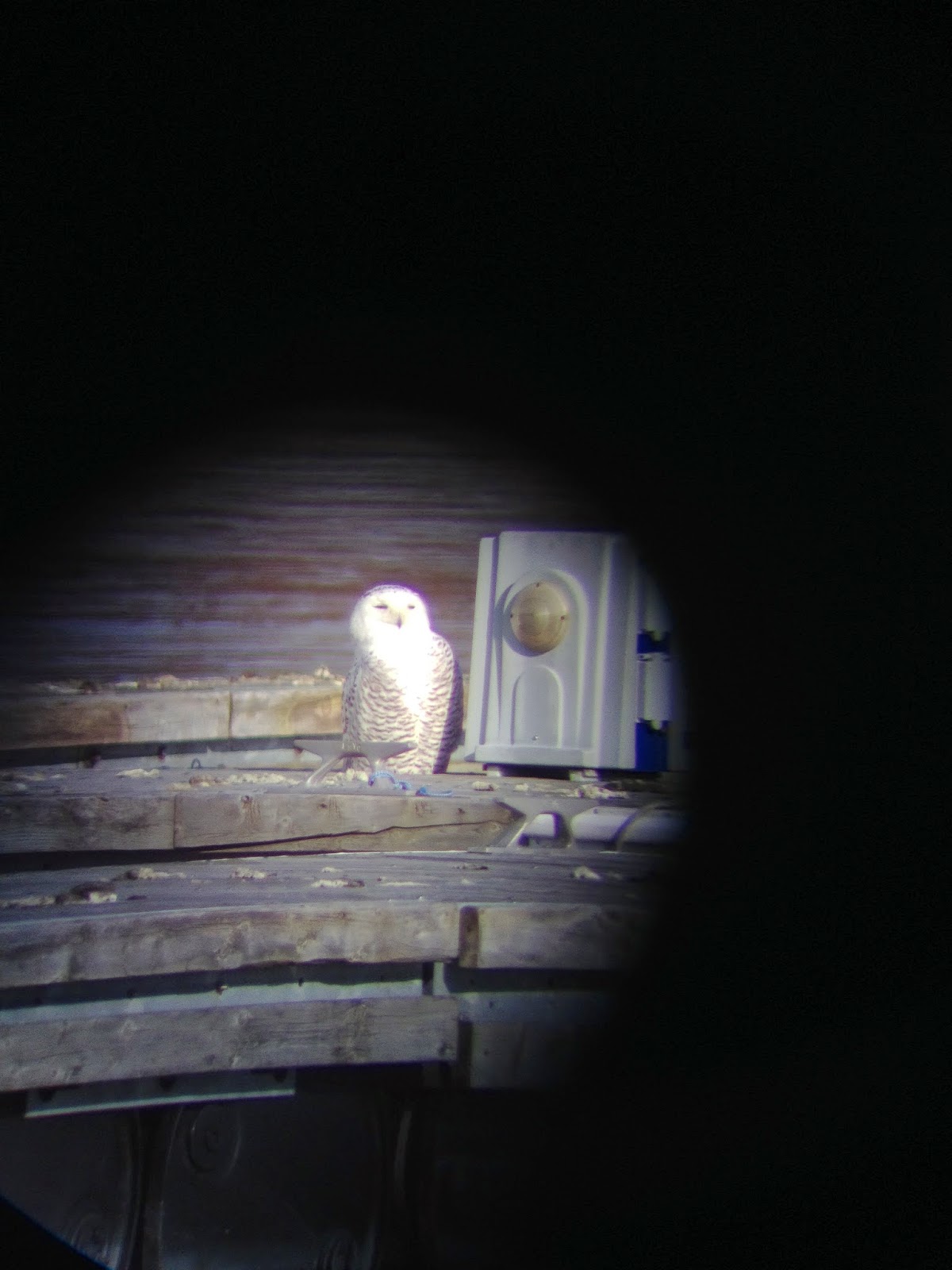 Here are a few photographs we have recently received from park visitors. One was taken with a cell phone camera through a telescope that a birder let them use.  This technique is called "digiscoping" and can sometimes yield results ..... not always, but worth a shot if you are prepared to ask politely. 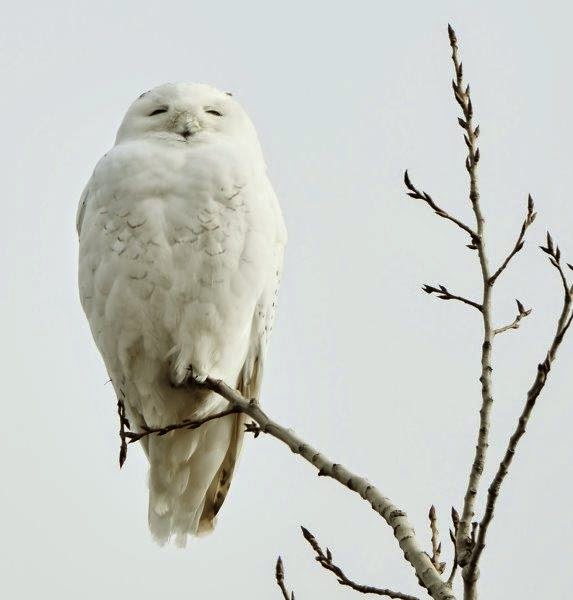 The Northern Saw-Whet Owl below was also photographed this morning in the park.  They are very small owls with large, rounded heads that lack ear tufts.  They are about 8 inches tall and weigh around 3 ounces.  By contrast, the Snowy Owl is about 25 inches long and weighs around 5 pounds.

CITY OF TORONTO "BIODIVERSITY IN THE CITY" BOOKLETS

The City of Toronto has produced a series of booklets on the non-human residents of Toronto.
The booklets are available for free at your local City of Toronto Public Library branch.
If you are having trouble finding them, you can contact Hailey Toft at the City of Toronto.
For a description of current and forthcoming titles, go to this "Biodiversity in the City" link.  There, you can also read PDF format versions of the booklets.
1 comment: 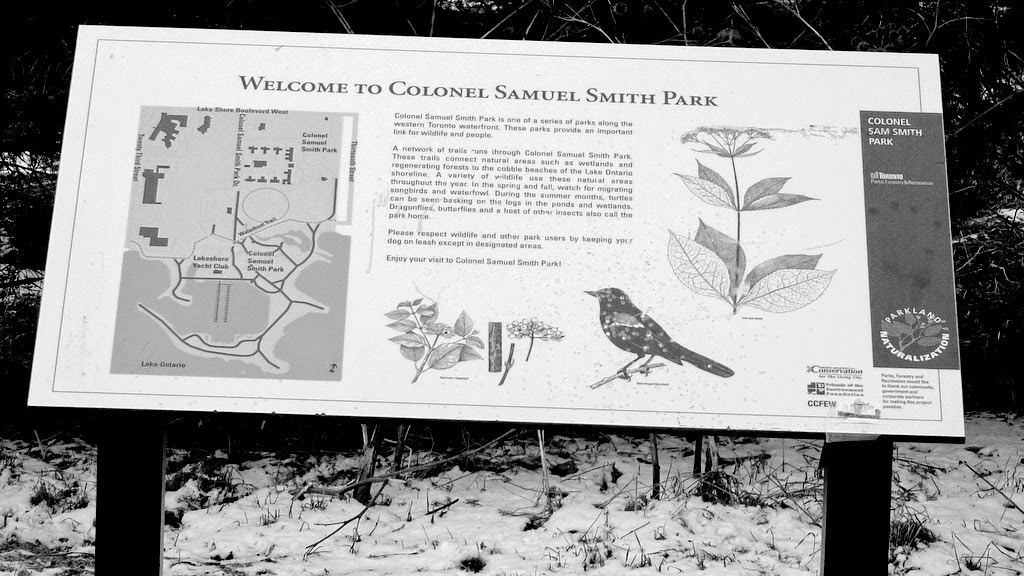 Last night, a number of members of Friends of Sam Smith Park and other interested parties went to the Etobicoke Civic Centre to take part in the City's Official Plan Review Open House. Planning staff were there to present their draft proposals for changes to the OP's Neighbourhoods and Environment policies.

We were there to support the proposed designation of Sam Smith Park as an Environmentally Significant Area and to lobby for the addition of two more sections of our park to the area already identified.  (For a link to the staff report on ESA's and 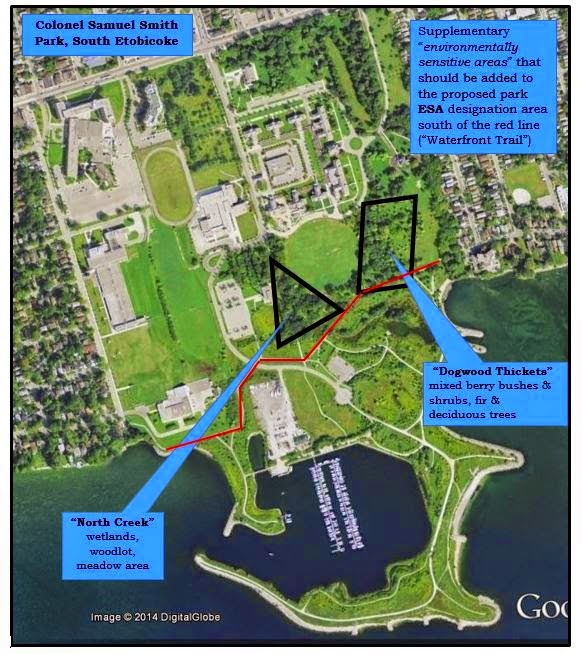 The Environment presentation was impressive.  The intent of the draft policies is to strengthen and build upon existing policies and they include, to further protect "natural heritage", 68 new Environmentally Significant Areas - Sam Smith Park being one of them.

There are four criteria the City uses to identify an ESA .....
Number four is the one that probably applies most strongly to the two additional areas identified by FOSS. (Most of the lakefill section south of the Waterfront Trail already meets the requirements.) 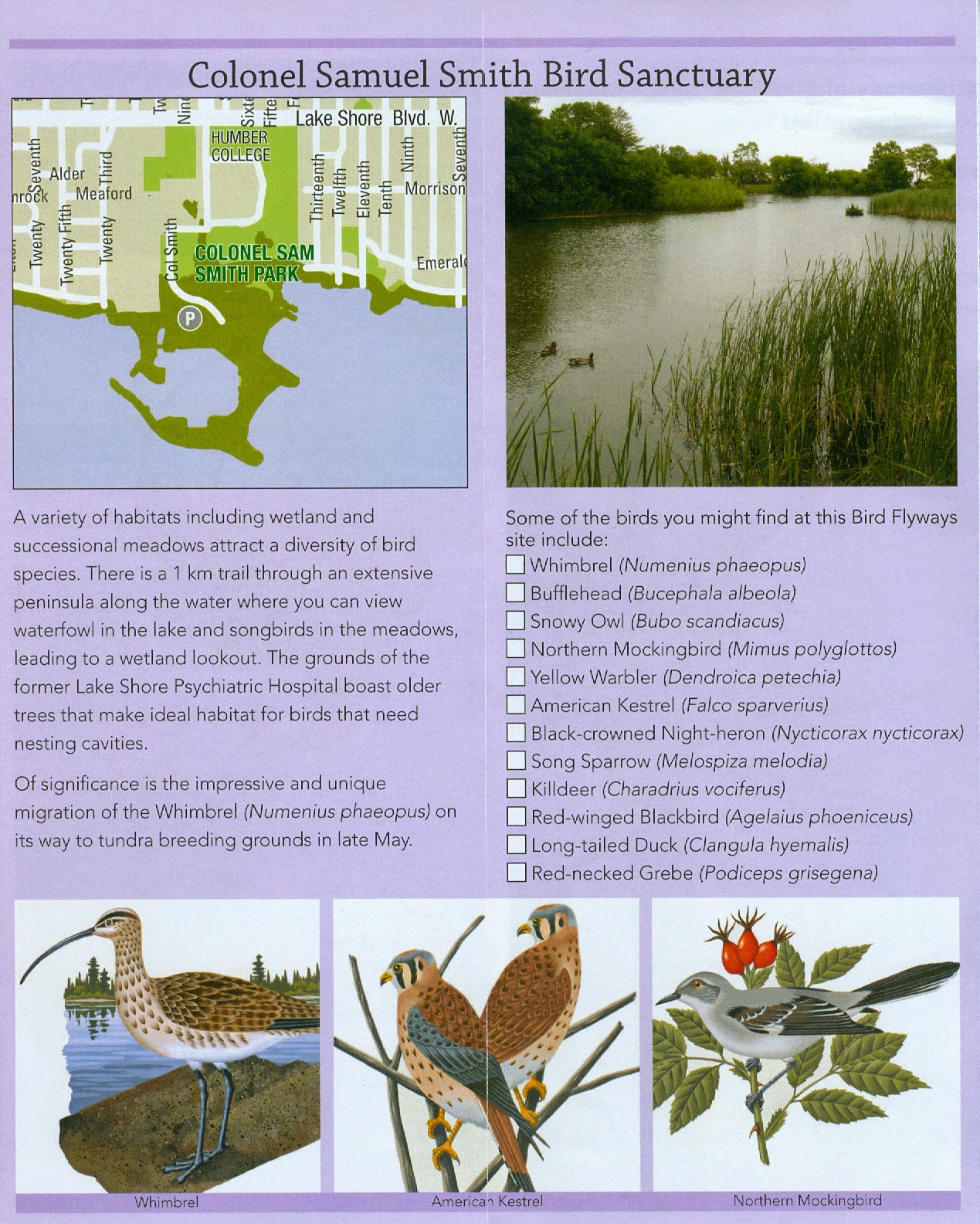 Remember, the City of Toronto Parks Department has already identified Sam Smith as a "bird sanctuary", an important link in the continental, migratory bird flyway system.  You can see the pamphlet they produced that illustrates this on a previous FOSS post.

Staff seemed impressed by the FOSS turnout and the passion we  expressed to support our suggestions. 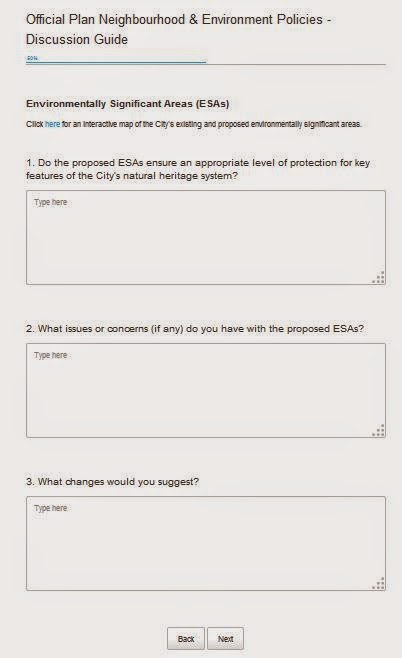 There is still an opportunity to take part in the discussion and to promote FOSS's goals.  (Yes to Sam Smith as an ESA and yes to the additional areas!)  More support would be very helpful.  The City has an online Discussion Guide where questions designed to get your feedback on the draft policies can be submitted from home.This is the link to the survey.  The Environmentally Significant Areas is on the third page and the "submit" button on the last.  The deadline is December 5th.

Additional comments can also be emailed to "Toronto Sustainable City".
No comments: 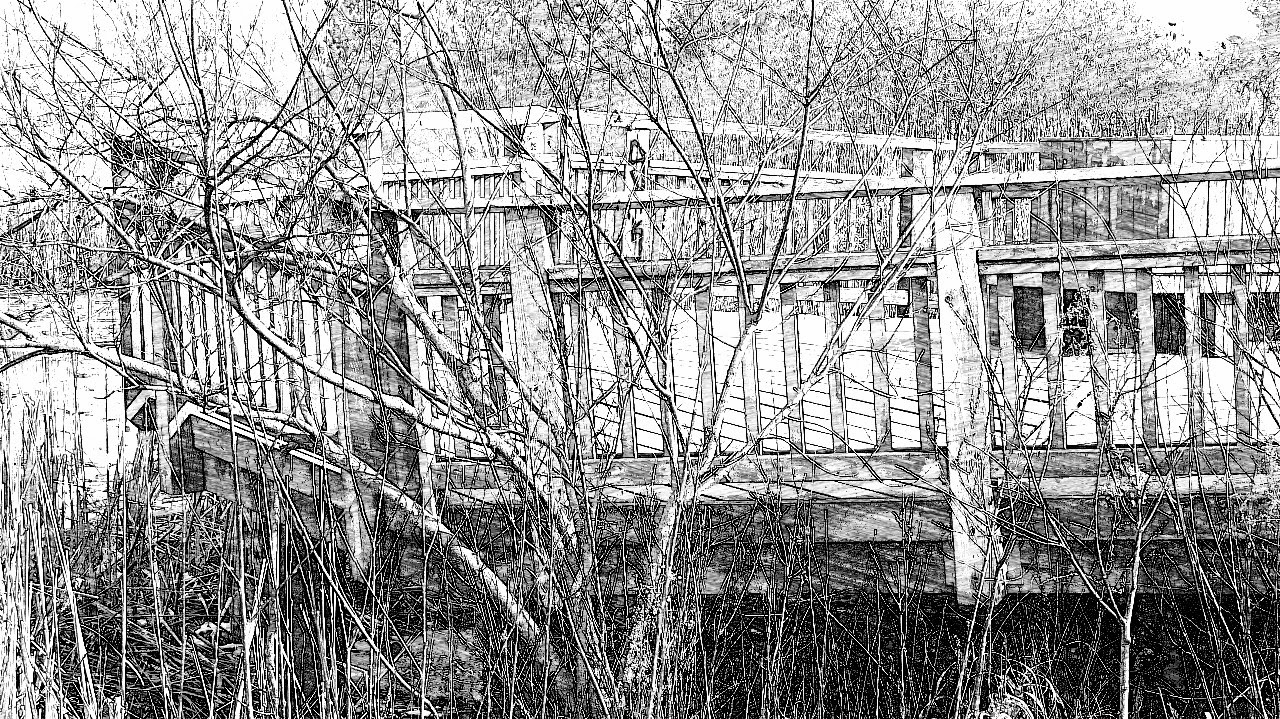 Great news!  The old, dangerous and unsightly observation deck in the large pond is going to be rebuilt ...... and, sooner, rather than later!

Friends of Sam Smith Park and other stakeholders have finally secured funding for the rebuild.  The funding source and design drawings will be supplied later.

Staging and demolition may begin as early as this week.  In order to complete this project before spring migration, as much work as possible must be started before everything freezes and is covered in snow.  If the footings can be put in place now, the rest of the construction can take place through the winter.

The City Parks Department and the Toronto Regional Conservation Authority will be closely monitoring construction. 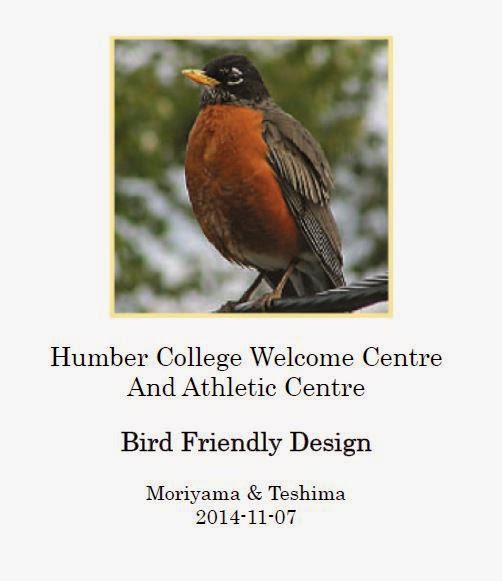 Recently, Friends of Sam Smith Park contacted Humber College with our request for bird-collision mitigation to be built in to the construction of the new Welcome Centre.

"......... we have not seen to date any information on the type of glass that will inevitably form a large part of the exterior fabric of the new building.  Ordinary glass, as you probably know, is a death trap for birds, particularly during migration.  Birds, with minimal forward vision but terrific peripheral vision, mistake the reflected tree as a real one and head towards it looking for the next food gleaning spot, and the result is an impacted bill, a crushed skull and death.  The numbers of our severely declining songbirds killed this way is staggering.  It is easy to research the awful statistics of this type of bird kill and the impact it is having on bird populations.Many architects, particularly in the United States, are using a “bird-friendly" glass in building construction  ......"

Humber College has taken our concerns seriously and provided us with this thoughtful and thorough report on their plans to incorporate "Bird Friendly Design" in to the new building.

"PCL Constructors and Moriyama & Teshima Architects represent the project team on both the Athletic Centre and Welcome Centre projects at our Lakeshore Campus. They have been working closely with us in reviewing and responding to your comments related to the migratory bird concerns and have prepared the attached report."

The 14 page report can be read by following this link.

SNOWY OWLS APPEAR TO BE MOVING SOUTH AGAIN THIS WINTER

During the winter of 2011, historic number of Snowy Owls moved south and sightings were common in this region and further south.  Last winter was also another bumper year ... "Snowies" were seen as far south as North Carolina and a pioneering one even ventured out to sea and was observed in Bermuda!  These winter irruptions are thought to occur because of variations in cyclical prey and predator populations in the Arctic (lemming populations typically crash every four or so years), but the exact dynamics still leave many questions.
A fairly quiet winter was expected this year, but there are indications that another "snowstorm" may be in the air .... probably not of the magnitude that was seen last saw last winter.
This bodes well for those of us who eagerly anticipate the first sighting of this magnificent bird in Sam Smith Park and scan the yacht club dock, waiting for our guest(s) to appear.

Sightings can be tracked at Project Snowstorm.
No comments:

Michael Earle, a local artist, has kindly allowed us to publish three of his paintings.
He says, "Sam Smith Park means so much to me and I hope that shows in the paintings."
Michael, we definitely think it does!  Thank you. 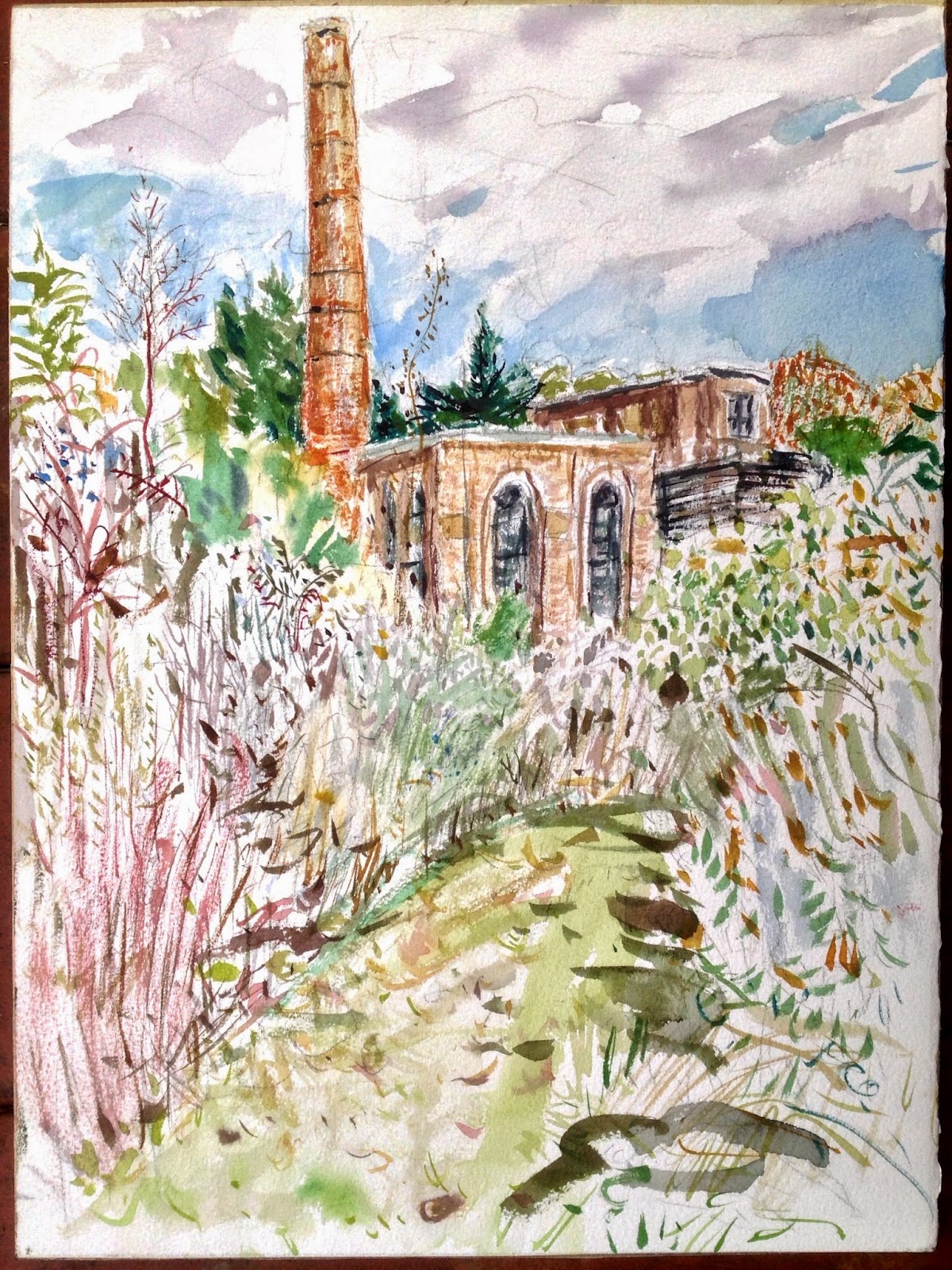 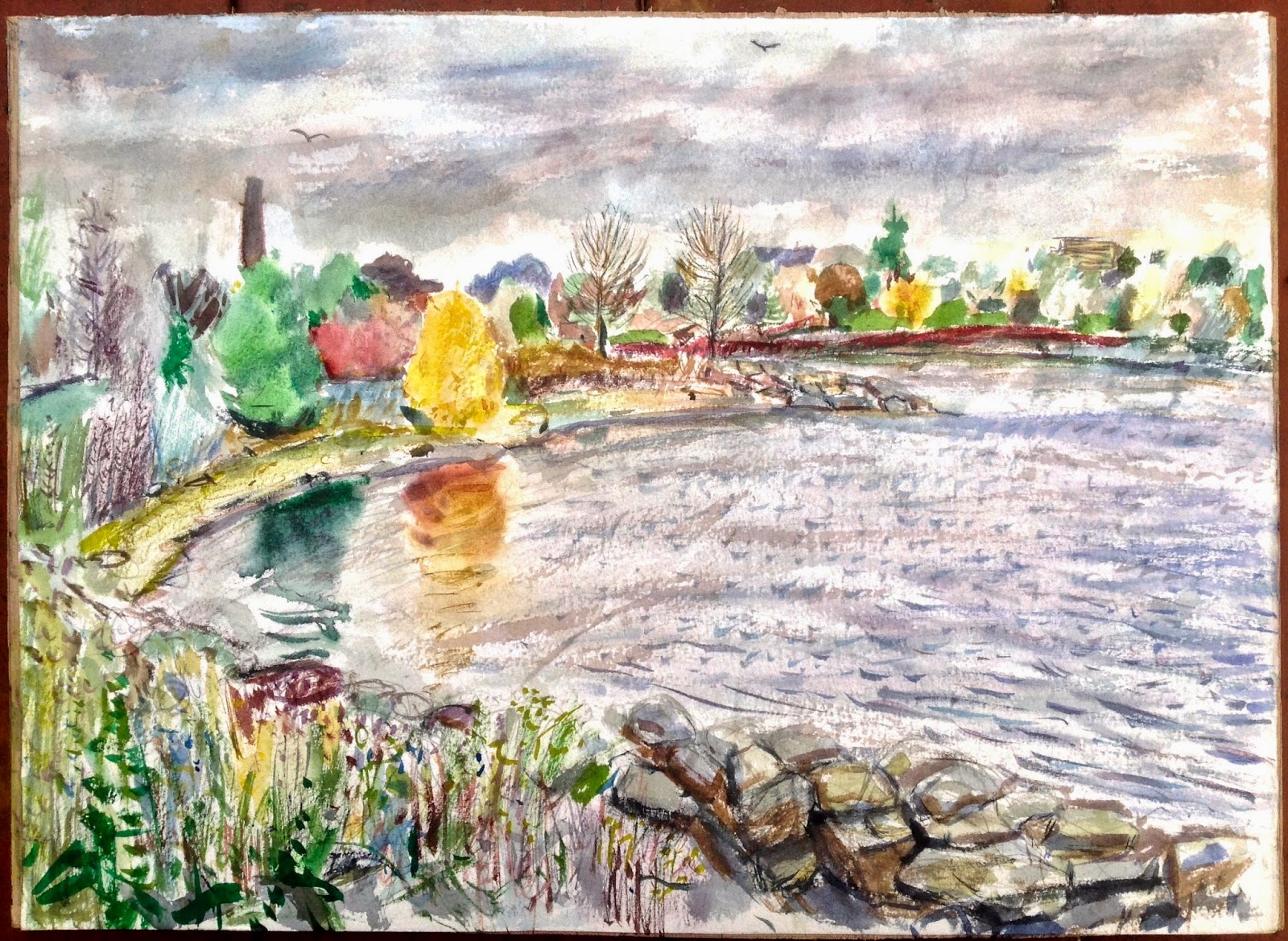 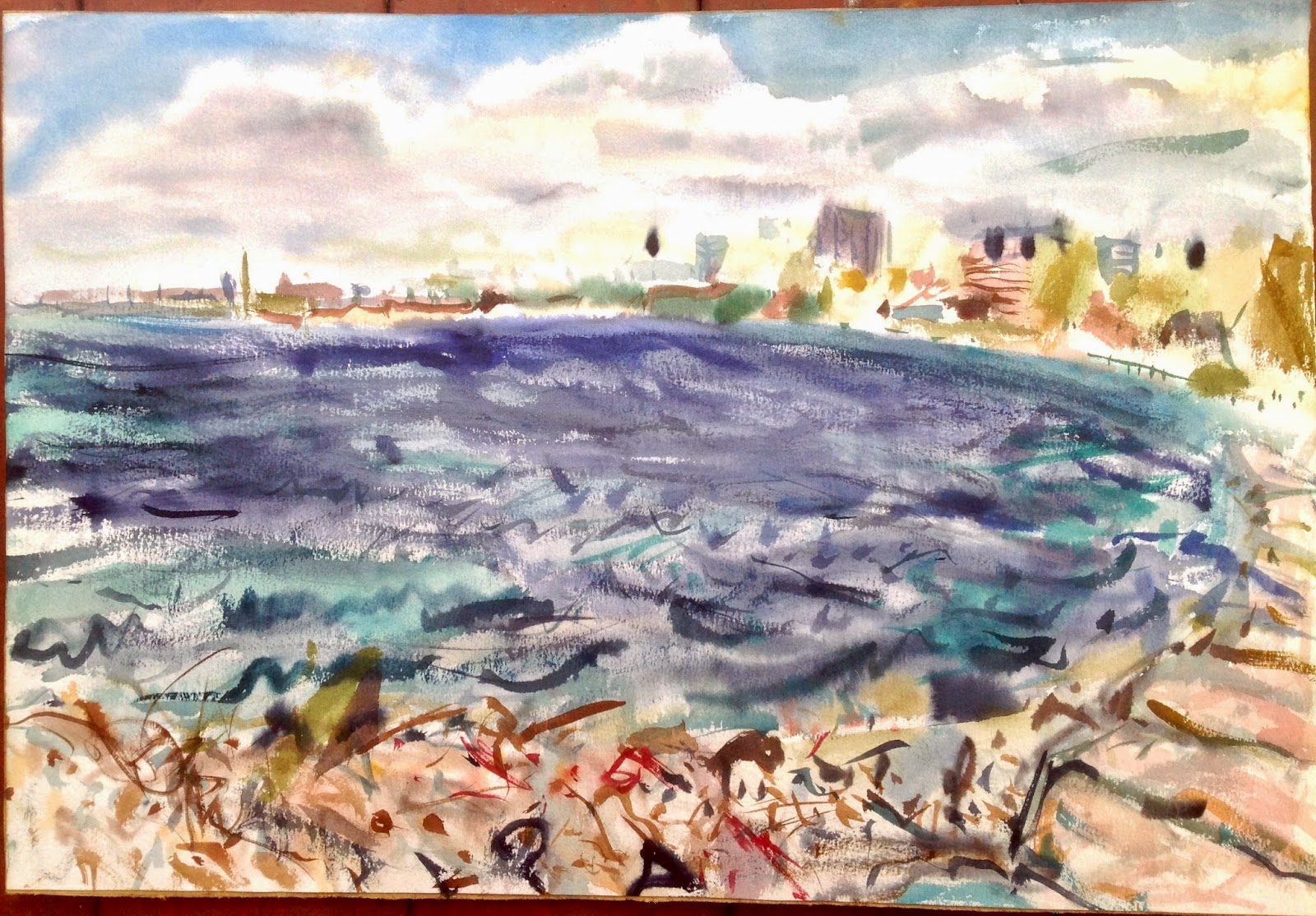 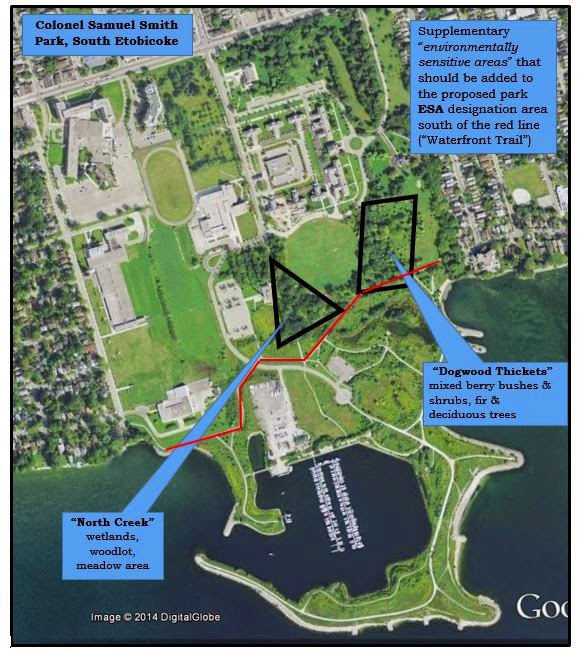 City staff have prepared a report for the Planning and Growth Management Committee proposing action on an Official Plan Amendment to add additional Environmentally Significant Areas to the City's natural heritage system. Sam Smith Park is one of them (see previous FOSS post on this - it includes a link to the full report).

Friends of Sam Smith Park is concerned that the area being considered for designation and protection  appears to be limited to the lakefill portion of the park south of the Waterfront Trail and does not include the two bird-rich areas to the west and east of the oval sports field - North Creek and the Dogwood Thickets.

FOSS has submitted a formal request to the City to extend the proposed ESA to include these two areas.  The map shows the areas we are suggesting.  We have also provided a description and list of birds that are commonly seen in these two birding hot spots (see below).

The City is holding an open house to invite Torontonians to share their views on the draft changes.  It is on Thursday, November 27th, 2014 at 6.30 p.m. at the Etobicoke Civic Centre, 399 The West Mall in the Council Chamber foyer.

It is important to be there to support the City's report and to lend weight to the the inclusion of the two added areas.  Please mark this in your calendars.

A small, historically important, wooded creek that runs down to a marsh on the west side of the sports oval.  It is bordered by a spruce woodlot, shrubs and meadow.


·         25 species of Warblers (including Hooded Warbler and Yellow-Breasted Chat)


·         Black-Crowned Night Herons roost and have nested in the spruce trees for over a decade.

A newly enlarged woodlot on the east side of the sports oval.  In 2010 and 2011, volunteers added new bird-friendly shrubs and


·         26 species of Warblers (including Cerulean, Blue-Winged and Golden-Winged Warblers)