Below is a position taken by the newly reorganized Friends of Sam Smith Park steering committee on the issue of off-leash dogs in the park.  (Reorganization details to follow soon)


This position is a follow up to complaints from many of our members about dogs running wild through environmentally sensitive areas and harassing wildlife.  A Toronto Star article this summer, a FOSS blog post with lots of comments and a publication from Friends of High Park prompted us to wade in to this difficult issue.
In response to a recent Toronto Star article about dogs running off leash in Colonel Samuel Smith Park and the negative impact that has had on wildlife, particularly to meadow and shore birds, Friends of Sam Smith Park received on its website many thoughtful comments from concerned members and other park users.


Remarks ranged from banning dogs altogether in the naturalized lake fill portion of the park to allowing dogs to run free.


However, the majority of comments, while describing and lamenting the harmful effect dogs running free impose on ecologically sensitive areas, pointed to three approaches – more signage, more enforcement of the leash bylaw and education.


These are the approaches that Friends of Sam Smith Park considers the most effective given the reality of the situation.


Sam Smith Park, although primarily a “nature” park, does not have the same status as Tommy Thompson Park (Leslie Street Spit) which the Conservation Authority, which controls it, describes as “an urban wilderness” where dogs and cars are not permitted at all.


In actuality, Sam Smith Park has become a park with some of the characteristics of a community park as well.  Although mostly used for the quiet enjoyment of its natural surroundings and wildlife, it is used for other purposes too, including dog walking.


Friends of Sam Smith Park will press the City to install “on leash” signs in the southern portion of the park where none exist at present, demand increased enforcement of the off-leash bylaw and urge improvements to the designated off-leash area to foster increased use.


Friends of Sam Smith Park will also move towards setting up our own information sign(s) offering reasons why dogs should be leashed in the park except in the area set aside for that. 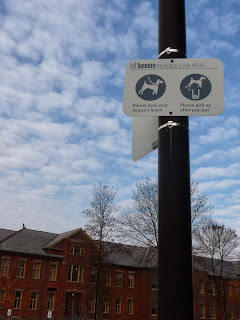 Although there are “dogs must be on leash” signs in the northern part of the park, particularly along the Waterfront Trail, there are none throughout the southern lakefill portion of the park (one at the beginning of the path from the south parking lot).  This prompts some dog walkers to remark that, as there are no signs, it must be OK to let their dog off the leash down there. 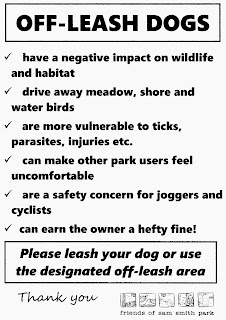 Dog walkers say that they rarely, if ever, see bylaw enforcement officers in the park.

FOSS feels it is important to educate dog walkers about why their dogs should be leashed. (This would be an important part of a three-pronged approach - signage, enforcement, education).  We first thought about coming up with a pamphlet we could give to dog walkers but, when FOSS members have spoken to dog walkers about this problem in the past, they have sometimes been met with hostility. So the idea of educational signage came up. We believe that a simple, clear message would have a beneficial impact on conscientious dog owners.  We researched but could not find any other examples of this kind of sign - maybe it would be a “first” and get used in other parks. 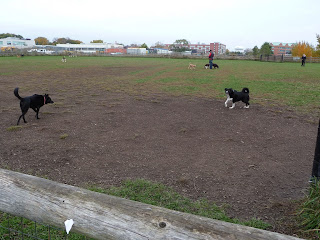 off-leash area in Sam Smith needs some improvements in order to make it more welcoming and help alleviate the off-leash issue.  Some suggestions have been shade trees, sand instead of a mud surface, wind protection, large rocks and tree trunks as activity structures, fenced off interior locations for trees and shrubs etc. Please use the comments section at the bottom of this post to give us your improvement suggestions.  We will bring all ideas to the City for consideration.

I agree that the existing off-leash park in CSS park is in need of improvement. Currently it is a large fenced in square with a couple of benches. Originally it intended to be grassy but now it is a big lot of dirt which turns into mud after rain and worse with melting snow.

Could an additional spot be allocated as an offleash area such as the southwestern beach? I note that many dog owners let their dogs swim in the lake during the hot summer months. It is welcome relief for the dogs to get in a swim and cool off. I am not sure if this rocky beach is a natural habitat for wildlife for not. If viable can that beach be designated offleash for the purpose of swimming?

I have found the leash free area in High park to be a large mud pit in areas.I think the only viable hope for the leash free area is sand covering.
If the dogs are not given one beach then they will continue using all the beaches.But the beach must be fenced and signed and I am not sure the city will be willing to do that.
Signage would be great.
If FOSS is going to do it's own signs I would be happy to contribute to that fund.

so birds can fly anywhere they want, but dogs can't run around? Sounds like hypocrisy!

Apparently both dogs and birds should be cautious because of the coyote that has been sighted there on a regular basis in the last few weeks.

Yes, birds can fly anywhere. Dogs can freely run around in spaces that are safe for people, other animals and the dogs themselves. This does not include the sensitive habitats located in Sam Smith Park.

The City is working on improving the off-leash dog area - adding more features, trees and shrubs, and possibly a dog friendly water fountain. We hope that dog owners will continue to obey the bylaws and keep their pets on a leash to minimize any risk they may pose to their own health and safety, or the health and safety of other people and species.

Training dog for a leash is one of most important factor. i really appreciate your concern that you have chosen this topic.

There is fully nothing quite like seeing your pooch run free; muscles stretching, powerful strides and obvious joy in their movement. this can be however dogs ar meant to be, running free and exploring their setting. http://dogsaholic.com/training/off-leash-dog-training.html