"CABLE WAKEBOARDING" AT SAM SMITH STOPPED IN ITS TRACKS! 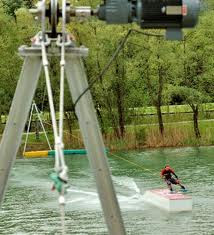 Some of you have heard rumours that the Councillor’s office was recently approached by Water Ski Wakeboard Ontario with a proposal for a wakeboard cable installation in the lagoon at Colonel Samuel Smith Park, along the very eastern shore of the marina.
The proposed cable wakeboarding system involves two towers and a cable that runs between them powered by a motor that pulls wake/surf boarders through the water at high speed.  Typically, this high activity sport includes flip stunts as well as jumping off of ramps etc.  Click here to view a short video of this sport from the manufacturer of the proposed system.

FOSS responded with the following ……

“All along the marina shore, particularly that shore, is prime nesting and fish breeding habitat.  Can you imagine what impact that would have on park wildlife?  TRCA have been trying for ages to establish a breeding programme for Red Necked Grebes and, guess what, to everyone's delight, this year the birds finally bred - in the same area the wakeboarders are wanting to use!!
The large kites used by the kiteboarders are already a problem to park breeding birds.  When they dry them out by hovering them in the air over that same nesting habitat, they must seem like the predator from hell as they circle overhead.
I haven't had the opportunity yet to survey our mailing list about this, but, without hesitation, I can assure you that there would be an outcry against this activity in our nature park, especially considering the master plan's emphasis on quiet, passive recreational use and all the work TRCA have done and money spent to create the wetlands and shore habitat.

I strongly urge the Councillor to politely redirect this group to a more suitable location.”

“Colonel Sam Smith Park is known as a bird sanctuary, as such the would be somewhat incongruous with the intent of the restored area. The park is home to passive activities for the most part.

“While this is not an official TRCA position, this proposal would never be considered for Col. Samuel Smith Park”

It is very gratifying indeed to see Councillor Grimes’ strong support of the Friends of Sam Smith Park position that Sam Smith Park is a “nature” park for passive recreational use.

This proposal illustrates the need for vigilance, however.  There are others out there who don’t understand the uniqueness of our park and the special purpose it serves those who love it and the wildlife that call it home.  There will always be eyes on our quiet sanctuary!

I agree this would be horrible...Can this not be done somewhere more appropriate Thanks for keeping up the blog

Kiteboarding kites are not predators from hell. They are no more harmful than the airplanes in the sky.

Considering that kiteboarders come to the park on average ones or twice a week for few hours, the impact on birds is minimal! A police car or garbage collectors cars are more likely to scare the birds then the kites.

Now I do agree, that there is no need for a wakeboarding cable park in the colonel samuel smith park!