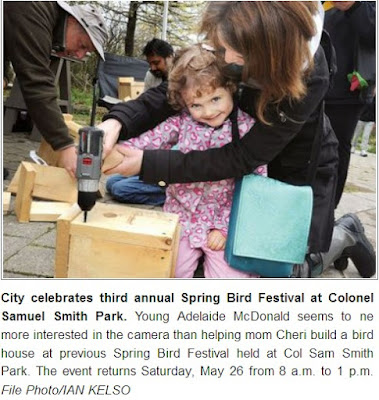 The third annual Spring Bird Festival will be held later this month at Colonel Samuel Smith Park.
The free event, which serves to inform residents and park users about the importance of bird habitats, will feature a live reptile and amphibian display, guided bird walks, children's activities, bird and bat box building, a live snake display, bird-viewing stations and educational displays.
Hosted by City of Toronto staff, in partnership with Toronto and Region Conservation, Humber Arboretum, Citizens Concerned about the Future of the Etobicoke Waterfront, and Friends of Sam Smith, the Spring Bird Festival will be held on Saturday, May 26 from 8 a.m. to 1 p.m. at Colonel Samuel Smith Park, 3131 Lake Shore Blvd. W.
Colonel Samuel Smith Park is a well-established bird stopover location for more than 270 species of birds along the Etobicoke waterfront.
Hourly guided bird walks run from 8 a.m. to noon. The festival officially begins with children's activities, educational displays and live bird demonstrations at 9 a.m.
Admission to the festival is free. Parking is limited, but the site is accessible by public transit.
For more information email greentoronto@toronto.ca or call 311.