At this year's Bird Festival, FOSS volunteers, along with visiting families, built bat houses as well as the usual tree swallow nesting boxes.

Why build a bat house?

Many bat species would typically roost under the bark of a dead tree and other safe crevices. However, due to habitat loss, this is often not an available resource. Bat houses provide a safe and secure home for bats to roost during the day and to raise their young.

Bats significantly reduce the amount of pest insects in our backyards while at the same time helping farmers and gardeners by eating insect pests. An individual bat can eat thousands of insects in just one night! More bats eating insects mean less pesticide use in our environment.

White Nose Syndrome, a virulent bat-killing disease, is responsible for the deaths of tens of thousands of bats, particularly the Little Brown Bat, Ontario’s most common bat species.  There’s no cure for this disease — which doesn’t affect humans, so don’t worry about getting infected — but by having bat boxes around, you could make the bats’ lives that much easier. That extra boost could help get them through winter, when the disease hits hardest.

Bats are helpful, not dangerous animals. They are safe and beneficial to have in your backyard. Less than 1% of bats have rabies.  The disease is also fatal to bats.  They are not carriers of rabies.

If you want to build a bat house for your home or cottage, here is the same Conservation Authority approved design we used at this year's Bird Festival. 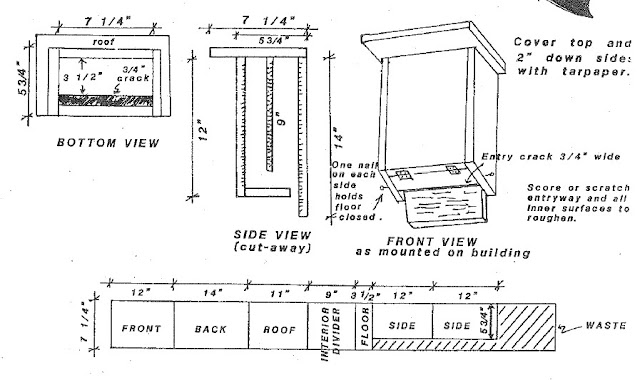 Locate your bat house about 12 to 15 feet above the ground on a building, tree or pole - a building will offer the most stable temperature. Orient your bat house to get maximum warmth, especially in the morning (southeast exposure).  If your bat house is not occupied by the end of the second year, try moving it to a new location.  The perfect location is near a permanent source of water (ideally within a mile of a stream, lake or marsh).