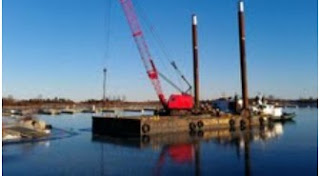 We heard via the grapevine that the old dock ramp is being replaced by a new ramp as it is obsolete. Also the club is installing 5 new extensions to the existing docks presumably to accommodate more boats. The barge is a drilling barge. They need to install anchors to the harbour bed to hold chains which attach to the dock.
No comments:

The City’s Stormwater Management Study Team plan to publicly unveil their recommended solution for stormwater management in South Etobicoke.  It includes an underground stormwater storage shaft in Samuel Smith Park and new interceptor sewers running along Lakeshore Blvd., Lake Shore Drive and Lake Promenade to intercept and convey the stormwater flows from the 30 existing outfalls to the underground storage shaft in the park.

The Study Team says they have considered suggestions from the Working Group (that included Terry Smith from FOSS) for environmental enhancements and naturalized facilities in the Park and for minimal disturbance to the local community, existing natural and recreational areas, as well as park functions. They say that during detailed design of the project, they will explore environmental enhancement and naturalization opportunities in Samuel Smith Park (e.g. for North Creek and the sediment embayment), in consultation with the local community, the Toronto and Region Conservation Authority, and internal City divisions.

This is an important meeting for those of us who are concerned about wildlife and habitat in our nature park.  The location and construction of such a deep and wide shaft will have a huge impact on the ecology of the park, especially for birds during migration.  It is vital that everyone attend this meeting to ask questions and voice opinions.
TYPE "STORMWATER" IN TO THE SEARCH BOX ABOVE TO SEE PREVIOUS FOSS POSTINGS ON THIS MATTER 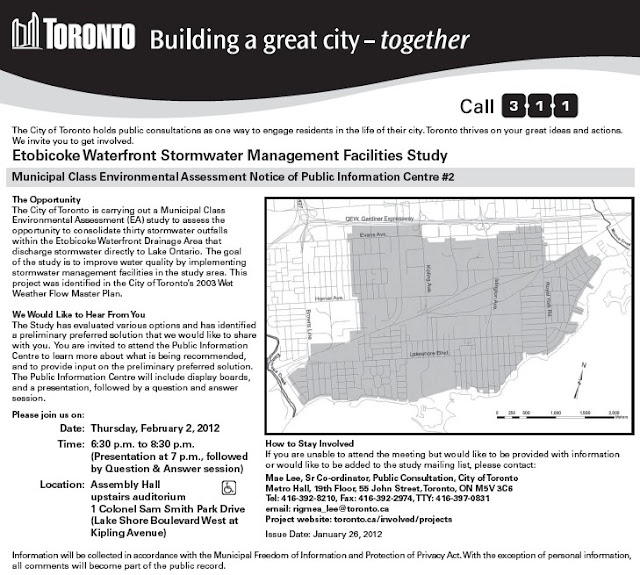