Read Etobicoke Guardian article and a previous FOSS post for the announcement of the plans to build the new TCDSB elementary school "Christ the King" on the Lakeshore Grounds.  This is a letter sent today from FOSS outlining some of our members' concerns and interests.

We understand that provincial approval and funding have recently been received to construct a new elementary school on the Lakeshore Grounds and that there is a 99 year lease agreement between the TCDSB and the City of Toronto for that site.  We also understand that at the TCDSB’s upcoming August 31st meeting this project will be discussed.

Friends of Sam Smith Park (FOSS) would like to have this letter placed on the agenda for that meeting and we also invite the Board to initiate public consultation on the placement and design of the school by holding community meetings at the earliest opportunity.

Friends of Sam Smith Park (FOSS) is a six year old group of local residents and park users dedicated to protecting, enhancing and preserving the naturalized areas of Colonel Samuel Smith Park.  We would like the opportunity to table some of our concerns and interests around the construction of the new school, particularly with regard to the environment and the preservation of the essential character of Sam Smith Park as a “nature park”.

First, we note that there are mature trees on the property and we are anxious that as many as possible be retained.  We hope that an inventory is carried out in accordance with the City's tree policy and that more trees will be replaced than need to be removed to allow for construction.

We have waited a long time for the heritage orchard to be restored and, as it is part of the school site, we would welcome your support in persuading the City to finally take some action to provide for the protection and/or replacement of the orchard.

There is a wonderful tangle of lush flora on the site that provides wildlife habitat.  To preserve this protective cover, there needs to be as much vegetation retained as possible.   Generous, naturally landscaped setbacks from Colonel Samuel Smith Park Drive and Lakeshore Boulevard would also help achieve this.

The Toronto Catholic School Board could use the construction of the new school as a catalyst to restore North Creek that runs through this section of the Hospital Grounds.   Restoration of the creek, including the planting of native species along the edges, would help re-establish this valuable riparian pathway used by birds during migration and by mammals as a movement corridor in the park.  Storm water run-off from any paved surfaces on the school site could be channeled through the creek to help maintain water levels.

Given the nature of the site and Sam Smith Park in general with its shoreline, wetlands, meadow and woodland supporting a magnificent web of life and a diversity of environments that provide food, habitat and protection for the many species of birds, animals and plants that call it home, we anticipate that environmental programmes will be emphasized in the school’s curriculum.

We also trust that the architects and designers will adhere completely to the lease agreement in terms of shared parking.  Underground parking might be included in the design to reduce the size of the asphalt footprint.  Or, failing that, a permeable surface should be considered if outdoor parking is necessary.

We assume that the Board will adhere to all the Urban Design guidelines adopted in 2004 and to the conditions outlined in the lease with the City with respect to no fencing other than for the kindergarten playground.

We are delighted that Christ the King has been designated an ECO school and hope that the new school will be built to LEED standards.

We were wondering whether a representative of the Board will be attending the next meeting of the Lakeshore Grounds Coordinating Committee so that the other tenants of the Grounds can be advised of the Board's plans.  Information about this committee can be obtained from the local Councillor’s office.

We look forward to any opportunity to work with you. 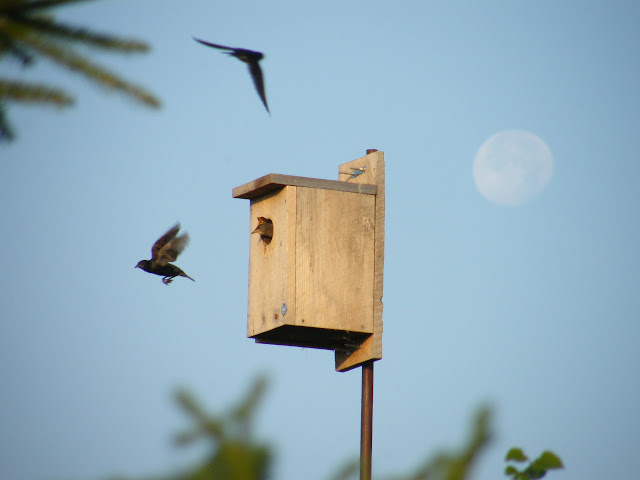 The tree swallow nesting boxes built by FOSS members and participants at the last two Sam Smith Bird Festivals have been well used this year.
(Thanks to George Raikou for this wonderful photograph.)
2 comments: