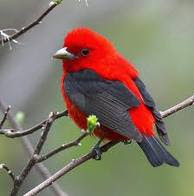 Wayne Renaud, a local birder, posted this report from Sam Smith last Saturday. It indicates the variety of birds that pass through this birding hotspot during migration.


I birded the park and adjacent Humber College Campus from 7:00 am to 5:00 pm for a big part of day.  The 'bowl area' was the big ticket item today, but other areas surprisingly had much more warbler activity in the afternoon.  There seemed to be a complete turnover of warblers in the 'bowl area' between 9:00 and 10:00 am when the wind picked up and it clouded over then cooled off and brightened up.  Overall the winds were quite light all day.
The highlight was a male Blue-winged Warbler off the north end of Bowl in a Horse Chestnut Tree just behind the brick house near Lakeshore.  The warblers today were dominated by four species: Yellow-rumped, Chestnut-sided, Black-throated Green and Palm Warblers.  These are the total numbers for each species (lowest to highest).  Wilson's Warbler:1; Canada Warbler: 1; Mourning Warbler: 1; Pine Warbler: 1; Blue-winged Warbler: 1; Common Yellowthroat: 3; Tennessee Warbler: 3: Nashville Warbler: 3; Cape May Warbler: 6; Blackburnian Warbler: 13; Magnolia Warbler: 13; Yellow Warbler: 15; Northern Parula: 16; Black-throated Blue Warbler: 20; Black-and-white Warbler: 24; American Redstart; 31; Palm Warbler: 41; Black-throated Green Warbler: 45; Chestnut-sided Warbler; 65; Yellow-rumped Warbler: 86.  About 80% of Magnolia and American Redstarts were males suggesting that at least with these species, there are a lot more to arrive in next week for so.  The other common warblers were about equally mixed.  Other notable finds today were 2 Ruby-throated Hummingbirds, a Grey-check Thrush, 3 Scarlet Tanagers, an Eastern Bluebird and a Spotted Sandpiper nest with four eggs.

Birds shown are the Scarlet Tanager and the Blue-Winged Warbler