Here is a follow-up to a recent post about the collection of pussywillows from the park.  People were seen gathering large quantities about a week ago.  When questioned by a member of Friends of Sam Smith Park and other concerned park users, a variety of misleading responses were given.  The matter was reported and investigated.  As a result, there were warnings given and letters written by the Bylaw Officer who will lay charges if this is repeated.
To report incidents, call Officer Bellamy at 416 392 0018
No comments: 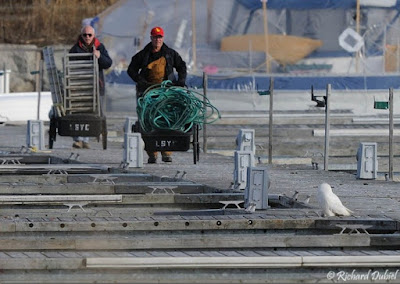 Richard Dubiel took this photograph of the owl over the weekend on its usual daytime roosting spot. A crew of workmen were on their way down to the docks as he was shooting. You can see the owl in the bottom RH corner facing the men.
No comments:

SNOWY OWL BACK IN THE PARK 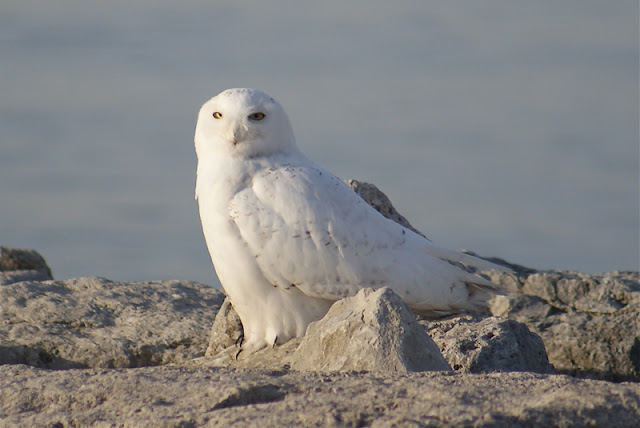 ILLEGAL REMOVAL OF PUSSYWILLOWS FROM PARK

We've been hearing recent reports of quite a few people breaking off and removing large quantities of pussywillow branches in Sam Smith.  This is against city bylaws (Toronto Municipal Code - Parks 608 - 7 B .." no person shall in a park break, injure, deface, destroy, move or remove the whole or any part of a flower, plant material, fungus, tree or other vegetation ...").

This is currently being investigated by the City.
The odd branch taken by a family may be probably no big deal, but these folks, we understand, are taking them to sell.  On the Lakeshore they sell for about $7 for three or so branches, so it's a lucrative activity.  Besides, the broken shrubs are upsetting for people to see and they should stay for all to enjoy.

This is just what we need to showcase all the wonderful wildlife we have in the park. The City is organizing some activities for the children  i.e scavenger hunt, exhibits etc.. CCFEW will be leading bird walks. FOSS was thinking of some events that we could offer on that day - one idea was a wildlife photography workshop.  Is there anyone who would be interested in leading the event?
Do you know any musicians who would like to play during the day.
If you would like to share ideas and /or like to volunteer, please let us know 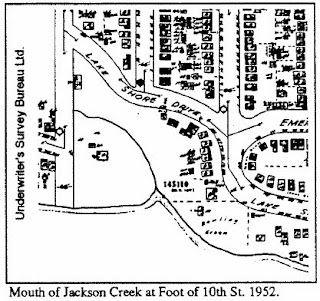 At the Rotary Park public charrette last Saturday, there was strong support for daylighting the mouth of Jackson Creek as well as increased naturalization.  Both were key features in the designs worked up by all three tables.
The design process is being lead by Netami Stuart from City of Toronto - Parks, Forestry and Recreation
She has a copy of CCFEW's  "Towards the Ecological Restoration of South Etobicoke", and she introduced the concept of daylighting the creek in her opening presentation.  This document can be read online.
It is becoming increasingly obvious that families, residents and park users want our parks, all parks, no matter how small, to have plenty of natural areas set aside for critters so that our kids as well as adults do not lose that essential contact in this grey, concrete world we all live live in.  Our children need a place to try catching a frog, to marvel at a darting dragonfly or to watch red winged blackbirds building a nest in the impossibly swaying reeds.
Richard Louv's "Last Child in the Woods" introduces the term "nature deficit disorder" as a contributing factor in things like childhood anxiety, depression and obesity - a thought provoking read.
We must protect what we have and insist on more!
1 comment:

I went to an interesting Parks and Environment Committee meeting at City Hall on Wednesday hosted by Councillor Paula Fletcher, the Chair. They had invited experts from the arts, community and academic communities as well as the TRCA to discuss ideas and opportunities for a new park vision.  The City is initiating a citywide, multi-year Parks Plan to guide decision-making for our system of public parkland.
The discussion was all about neighbourhood empowerment and calls for local grassroots organizations to be embraced instead of merely tolerated or ignored.  It was suggested by many of the speakers that the City tends to regard parks as “private property” and that the management model currently employed is too rule-driven, permit dependent, too standardized and excessively governed by concerns over liability and CSA standards and renders these public spaces virtually inaccessible.  The committee was told that community groups should not be treated as supplicants but as partners and that the City needs to give up its “guardian mentality” so that citizen energy can be engaged.  One speaker went so far as to say, “Public energy in Toronto is sucked into a black hole of nothingness – it should be allowed to flower!”
Adam Vaughn spoke to an idea that’s been kicking around the parks Committee for a while – the idea of each park having a PIA, a Parks Improvement Association, made up of local community groups, residents and stakeholders.  This sounds a lot like the Public Advisory Board recommended in the Sam Smith Master Plan from the nineties.  Calls from the community for this to be implemented have been ignored so far by the City’s political representative.
Hopefully, the tide is turning.
Posted by Terry Smith
No comments:

Cooper's Hawks have returned to their original nest site! 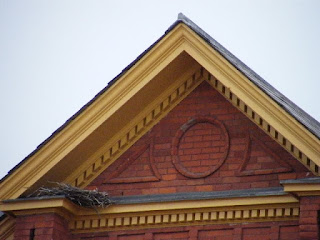 The Cooper's Hawks have returned to Building 29, the most southwest building at Humber College, facing south.

The hawks used to nest there, but the area has been under construction for some time.  Last year the pair nested in a fir tree west of the playing oval, and the year before, they were in a nearby willow tree.

The hawk watching should be much easier this year.

Many thanks to George Raikou for the photo.