Two photographers in the park today reported seeing a snowy owl in the yacht basin, on the 4th last dock, on the east side.
This is an extremely early sighting for this species in our park. 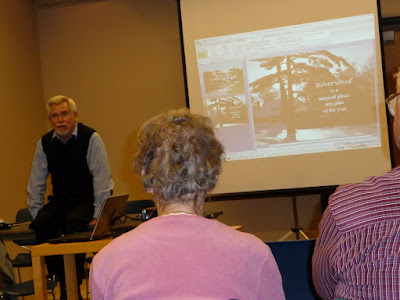 Last night, Dave Taylor from the Riverwood Conservancy in Mississauga gave a spirited and eloquent accounting to Friends of Sam Smith Park of his organization's beginnings and the wonderful work done there around education and stewardship.  From the initial fight to save a diverse natural area along the Credit River from development, the community and supporters have created an enduring legacy for the residents of Mississauga, a place where they can peacefully wander riverside, woodland, meadow and wetland with a good chance of seeing wildlife.  It is our goal that Sam Smith, our nature park, continues to provide that for us.
Thank you, Dave, for your inspiring story.
Let's all make sure we get out and visit Riverwood. 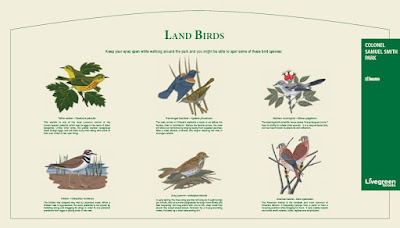 Members of Friends of Sam Smith Park, CCFEW and Janette Harvey, a natural environment specialist from the City of Toronto - Parks, Forestry & Recreation have been working with some enthusiastic students from Sir Sandford Fleming to create new interpretive signage for the park.  The signs will be made from a tough acrylic that is designed to withstand weather and vandals.  They will be similar to the butterfly signs at Humber Bay East and the one we now have, thanks to CCFEW, at the south parking lot in Sam Smith.  Here is one of the signs.  The other signs will cover water birds, native plants, mammals, butterflies, beavers, snakes, wetland wildlife and forest succession.  The plan is to have them installed early next year.

Here's a report from a local blogger of a recent coyote sighting.  Watch your small dog!

DEVELOPER VERSUS RESIDENTS OVER LOSS OF LOCAL LAKE VISTAS

The City, Toronto Region Conservation Authority and Lakeshore residents are going to the Ontario Municipal Board next week to request the OMB to deny the developer Dunpar their application to cram seven dwellings on to a small, lakeside property at 51 Lakeshore Drive at the bottom of Fourth Street, a move that substantially contravenes the City's Official Plan and South Etobicoke's zoning regulations.  It will deprive the community and Waterfront Trail users of lake vistas, walling them off with a massive townhouse barrier.
For more information, go to the residents' blog.
Please join us down at the OMB next Monday if you can. 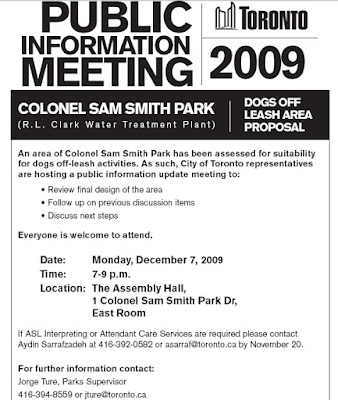 It seems inevitable that the City's intention is to establish an off-leash dog walking area in Sam Smith.  The question is where.  If it ends up being anywhere other than the Water Treatment Plant's grounds, such intensive use would have a huge impact on wild life.
Come out to this meeting and share your views.

MORE INFO ON THE STORMWATER PROJECT 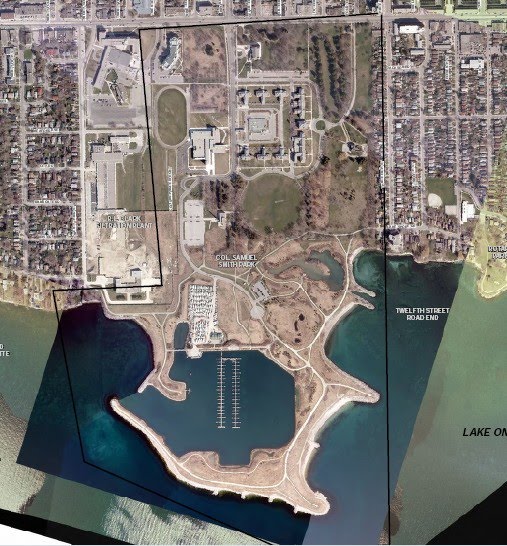 Today, I spoke to Josie Franch, the Public Consultation Coordinator for this project, and she told me that any end-of-pipe system put in to Sam Smith could go anywhere inside the box shown on this image.  If the system is located in the lake itself, like a flow design, then somewhere inside the shaded area is where it would be.  This is somewhat different from what we were told at the presentation where a number of "constraints" were outlined (referred to in the previous post).  Josie can be reached at 416 338 2859 or by e-mail.  The City has a web site for this project.
We will talk about this some more at Thursday's presentation where we will have some blank comment sheets available.  They are also available on line.
Many people who attended the presentation last Thursday felt that the November 26th deadline for public comment on this project is way too soon for the community to understand all the implications.  A suggested first comment might be a request for more time!
Posted by Terry Smith 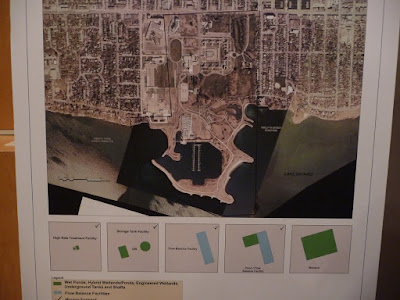 (DOUBLE-CLICK ON IMAGE TO VIEW)


At last Thursday’s presentation on the Etobicoke Stormwater Management project, the community was introduced to the South Etobicoke element of the City’s 25-year plan called the Wet Weather Flow Master Plan.

There are 30 storm water outlets along the Etobicoke shoreline that carry untreated rain runoff to the lake. (In South Etobicoke, sewer and stormwater pipes are, fortunately, not connected as they are in some other parts of the city.) The City wants to build end-of-pipe systems that would collect oil, dirt, grit and pollutants from this runoff before it is discharged in to the lake. These systems would be designed to treat 90% of rainfall events up to 25 mm. The goal is to provide shoreline water that is cleaner for swimming and for wildlife.

Sam Smith Park is definitely on the list. There is an existing outlet in the marina just east of the clubhouse that has a floating barrier – this outlet already carries most of the runoff from a large catchment basin further north, up to the QEW. (We were told that this basin would not be increased).

The photograph on this post shows the park with different system designs that could be employed at Sam Smith at the bottom with a checkmark. The footprint of each design is to scale with the map of the park. For a detailed explanation of each of these management methods for end-of-pipe control along with all the other presentation material, go to the City’s project website.

Staff asked for public input via a comment form they handed out. They explained that this would be the only opportunity for the public to add input. The form can be found on the City's project page where it can be printed and mailed. The address where it should be mailed is at the bottom of the second page. Alternatively, there is an e-mail address and phone number there as well.  According to the City's handout, comments need to be in by November 26th.   They are hoping for site(s) and design choice to be completed by February 2010! In the opinion of most people at the meeting, this is far too early for the public to digest all the possible alternatives without a full, site-specific explanation of all the implications. This fact should definitely be expressed in any communication with the project team.

Terry Smith will replace the vacationing Allen Valk as FOSS’s representative on the Community Working group associated with this and can be contacted at tz.smith@sympatico.ca. The next meeting for this group is scheduled for January 2010, just weeks before the announcement of the chosen site(s) and system – seems extremely inadequate.

If Sam Smith is chosen as the sole or the major site, most park users who appreciate the natural elements of the park would probably go for an option that has a possibility of enhancing wildlife habitat, like a wet pond and flow balancing system combination. But, there are possible problems with this. Because of piping, gravity and proximity to the lake constraints, where could they be built? – the north swale is definitely out. What existing habitat would be removed to accommodate them? What would be the maintenance issues? … and so on. There are always concerns when development of any kind is proposed for a special place where every existing square foot is cherished. This is a complicated issue that requires a lot of thought and education.

Read comments on a Sam Smith off-leash area from a 27th Street blogger.
No comments:

In preparation for this Thursday's Stormwater Management presentation at the Assembly Hall, you might want to read the minutes from the Etobicoke Waterfront Stormater Management Facilities Study Community Working Group's meeting held last March

This project has many implications for Sam Smith Park. 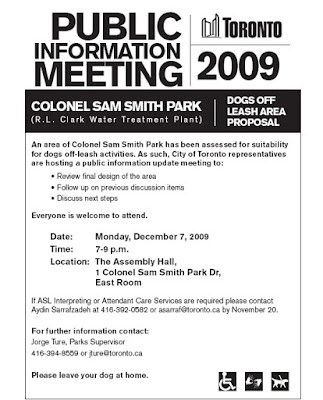