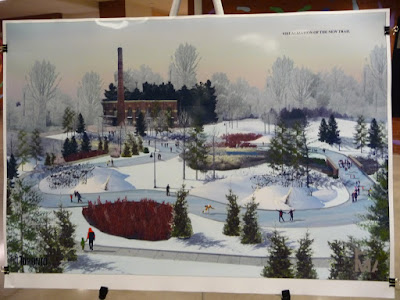 These are the final design and computerized visualization of the skating trail presented to the public this evening at Father John Redmond. (Double click on images for larger scale). The design is very close to the concept sketch we were given before the summer and which can be found on this blog. Approximately 40% of the western section of the meadow will be lost to the 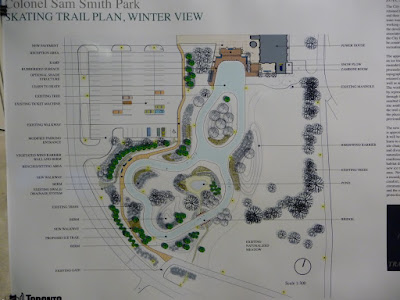 trail. We were told that construction will start very soon and that the excavation and concrete forms will be completed before the end of December when construction will stop until resuming in April to finish the project. The lighting shines downwards and the music will come from speakers on the lamp posts, not broadcast from the Power House. We were told that the TRCA will furnish funds for planting and habitat restoration in the remainder of the meadow and in the woodlot north of the Power House. There is, as yet, no significant movement towards the establishment of the long-called-for Citizen's Management and Advisory Board for the Park.