GREBES HAVE PRODUCED AN EGG, AND A SECOND PAIR OF GREBES 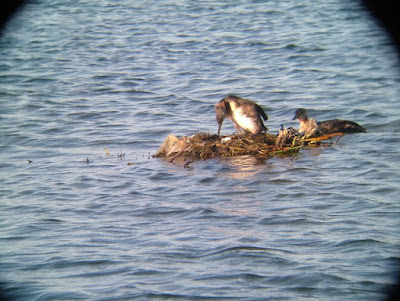 Update August 3:The grebes are incubating at least 1 egg as of the end of July. Both the female and the male are taking turns incubating and also are now defending their nest site against a SECOND pair of grebes now residing in the yacht club basin!

Update July 15: The grebes have returned to their original nest site. The female is sitting on the remnants and may be heavy with another egg.
Let's hope for success!

Update July 12: In the aftermath of Saturday's powerful storms, which caused much damage to the vicinity, the egg and nest were gone as of Sunday morning. Hopefully the grebes will return next year to try again. Many friends of Sam Smith have certainly enjoyed watching them over the last few months.
______________________

George Raikou has photographed the grebes tending to a new egg near the eastern end of the yacht club basin. 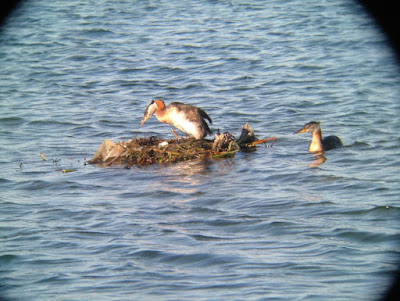 Last year this pair nested in the reeds nearby and also laid eggs. The eggs were found scattered about afterward, so this year the birds have built the nest offshore.

Here's hoping for more eggs in the next few days and some successful hatches by early August.