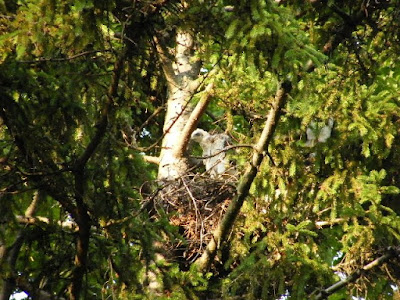 Photograph from George Raikou of one of the Cooper's Hawk chicks stretching its wings. The hawks are nesting again in the park close to the spot where they were last year (in a spruce tree at the top end of North creek). This is the third year in a row they have chosen nesting sites in the trees around the Power House.
No comments:

In spite of requests from the community for a public meeting on the revised skating trail design, the Councillor's office is making it clear that there will be no more public discussion about this project. Below is a response from the Councillor Grime' executive assistant to such a request from a local resident. It explains the City's position.
Given that this new design is totally different from the concept designs already presented and encroaches on the meadow south of the Power House that was so hotly defended by the community when it was under threat from a skateboarding facility, it is surely advisable to allow the communuty a final say before it goes to tender and construction begins.


As you are no doubt aware the vision for an ice skating trail arises from the Moore George Report which was the master plan for the Lakeshore Grounds. This was more than a decade ago. In accordance with requirements for an environmental assessment , the City
of Toronto has held two public meetings in the last year in regards to the Proposed Ice Skating Trail.
The purpose of these meetings is for a community consultation to have input from the local residents regarding suggestions or concerns they may have for the proposal. Everyone in the Ward were invited to attend the public meetings, including those who had concerns regarding a previous proposal a skateboard park
During the first meeting the topic of discussion was a proposed location at the south end of the Power House in Colonel Sam Smith Park.
Following that meeting, where suggestions were made regarding the location, a second meeting was convened to suggest the location of the trail in the Woodlot to the North end of the Power House.
Once the public meetings had been convened the suggestions and information from the community input is considered in the final plans. The Project has been reviewed by the Provincial Ministry of the Environment, the TRCA and the community has had input. The majority of individuals who contacted staff or the councillors office were in favour of an ice skating trail in Colonel Sam Smith Park.
The project has been through all stages of the assessment process and has been approved by City Council
The Councillor has also taken the time to have staff meet with additional representatives of the community to hear their concerns and address the relevant issues wherever possible.
It is as a result of these many community meetings and the input from the consultation process that the final plan was shaped. Councillor Grimes has made every effort to exceed the city 's basic his legal obligations on this project. Many steps have been taken to concerns raised, such as the re-use of areas that are already paved, the movement of a large portion of the trail to the area south west of the power house, community involvement in the re-planting of the meadow etc.
The Councillor appreciates the input and suggestions that has arisen from the dialogue with the community, and many of them have been incorporated into the final plan.

Hi everyone,
As I'm sure you are all aware, negotiations between the City of Toronto and both union locals (79 and 416) are continuing. Both union locals, however, are in a legal strike position as of 12:01 a.m. on Monday, June 22, 2009.
Should a labour disruption occur prior to June 24th, the scheduled date of the Etobicoke Waterfront Stormwater Management Facilities Study, please be advised that the public meeting will be postponed until further notice.
If you have any questions, please do not hesitate to contact me at any time.
Thank you
Josie Franch (Giordano)
Sr. Public Consultation Co-ordinator
Public Consultation Unit
City of Toronto
Phone: 416-338-2859 Fax: 416-392-2974
TTY: 416-397-0831 Email: jfranch@toronto.ca
55 John Street, Metro Hall 19th Floor, Toronto, ON M5V 3C6
No comments:

It is important that members of FOSS attend the Etobicoke Waterfront Stormwater Management Study meeting being held at the Assembly Hall on Wednesday June 24 at 7 p.m ( See previous blog post ).
We understand that the plan is for storm water to be be pumped to a holding facility somewhere in Sam Smith. There has been talk about daylighting some of the creeks in the park and re-establishing the bigger swale as a pond/wetland area.
This will have a huge impact on the park and public input is required.
No comments: 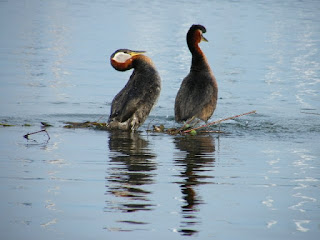 Don Burton will be leading a Bird Walk this Saturday, June 13th at Colonel Samuel Smith Park from 9:00 a.m. to 11:00 a.m.
Spring migration is over. Now we can see the wide variety of birds that make the park their home for the summer. Notable among the nesting species is a pair of Red-necked Grebes which look to be intent on creating the second nest ever recorded in Toronto. This will be our last walk until September.
Meet in the south parking lot (where the road ends) at 9:00. Walks are held rain, or shine.
The photograph of the pair of red-necked grebes is by George Raikou who offers this comment .... "If they are the same two..last year they build their nest and had three eggs but the nest was lost . This year they are building the nest further in the bay. They like to put on a show just after mating." 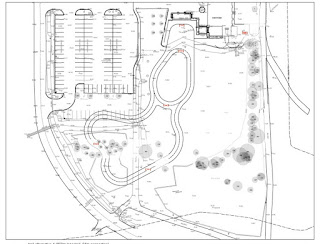 This is the latest concept design recently forwarded from Councillor Grimes' office for the skating trail projected to be built by December 2009. (Double-click on image for larger view). Note that parking spaces have been removed to accommodate this south-west design option. There is some intrusion into the meadow. The woodlot north of the Power House is not part of the design. We are told that funds have been set aside for plantings in the meadow and for the restoration of the understorey in the woodlot next year.
Please comment by clicking "Comments" below.
6 comments: 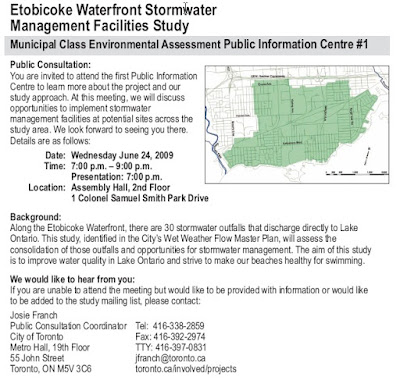