CONCRETE "BUNKER" TO BE BUILT IN PARK? 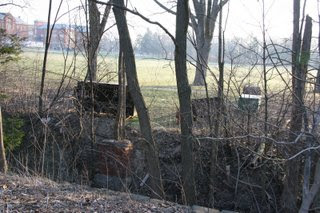 There is the distinct possibility that a permanent concrete "bunker" (Jorge Ture's word) will be built to store equipment for the Australian-rules football teams. The probable location will be the current storage box location. Below, I have posted recent communication about this issue with Jorge Ture, Supervisor of Parks Maintenance, Etobicoke York District, who is responsible for choosing the exact location. In his reply, he states that he welcomes opinions from park users and makes his decisions based on what he hears. If you wish to contact him, call him at 416-394-8559 or e-mail him at jture@toronto.ca
Alternatively, you may want to go directly to Kevin Bowser, Manager of Parks, Etobicoke York District at 416 394 2486 kbows@toronto.ca

Thanks for promptly returning my call about the proposed concrete storage shed for the Australian-rules football teams.

You mentioned that, if it gets built, you favour the present location where the storage boxes are now over the two other possibilities, against the Power House or elsewhere around the oval.

As you know, the woodlot, shrubbery, creek, meadow and wetland in that corner of the park form a very special place to all the members of Friends of Sam Smith Park and to the many naturalists who use the park We have long struggled to maintain the natural vegetation and character of that area and to minimize any impact on wildlife and habitat. It is true that North Creek, once an above-ground creek, could be described as a "waterway" and that it does carry storm water down to the small wetland and on to the lake, to the birds who follow that riparian pathway during Spring and Fall migration, it is indeed a creek and, as such, attracts species who require that kind of habitat.

As you know, lots of birders come to that very place during Spring
migration. It is now a well-known Toronto area birding hot spot. You can see them searching for species in the spruce grove, along the creek and in the shrubbery that borders the creek, often leaning on the small bridge as the birds work their way northwards towards them, through the canopy, understory and ground cover .

When the storage boxes were originally put there, many were unhappy with the location, for two prime reasons. Aesthetically, they are an eyesore in such a natural setting and shrubs were removed to create a "clearing" for them. We thought that perhaps they were placed there only temporarily. Now it seems they may be permanently replaced by what will probably be a bigger
eyesore, a concrete bunker, requiring even more clearing of vegetation.

As there are other possible locations for the bunker, we urge you to
consider moving the storage boxes from the creek area, thus allowing the shrubbery to regenerate, and to choose another location.

George, please let me know what your thoughts are on this matter. Thank you

Hi Terry
As you can appreciate with so many park users who everyone has an opinion on what is appropriate or not and I do my best to balance the needs of all park users and try to find common ground. Thank you for sharing your thoughts with me I will give them serious consideration.
Jorge Ture