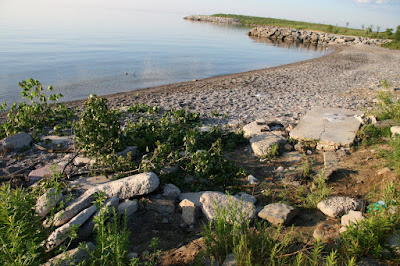 Wednesday morning, third beach ....... in addition to the usual still-smoking remains of the previous night's fire, the smashed beer bottles, the food and drink cartons and discarded clothing, there were a number of sawed-off saplings and branches from recent park plantings that the revelers had gathered to keep the fire bright. Of course, the green wood did not burn and was left on the beach, sad emblems of insensitive indifference and waste, only meters away from the vandalized, burnt-out wreck of what used to be the wildlife observation deck.
This is happening a lot right now and will increase, as usual, now that Summer is under way.
Some say that this behaviour is just youngsters doing what youngsters do; others call it a crime. In recent weeks a FOSS member was brutally attacked when he approached some teenagers in the same spot asking them to put out their fire. Youthful exuberance can certainly have its dark side.
There seem to be very few patrols by police officers. They know of this ongoing problem but, for some reason, are rarely seen attending to it. Perhaps it is time that we inundated the police with requests to step up patrols.
If you wish to add your voice to this, you can call Sergent MacDonald at 416 808 2199. He is in the Community Response Unit at 22 Division and responsible for ordering patrols. Better still, you can call his boss, Staff Sergent Khan at 416 808 2213. Even better still, I was told that, if you are not satisfied with the follow up, a call to Chief William Blair at 416 808 8000 can be very effective. A written complaint can also be made at the Lakeshore sub-division station by completing a Community Policing Complaint Form, insisting that they forward it to Sergent MacDonald at 22 or taking it there yourself. And, of course, there is also the Councillor's office, Mark Grimes, 416 397 9273 - maybe you could add a reminder that a proper Community Center might go a long way towards giving youngsters on the Lakeshore a constructive alternative for evening activity.
Posted by Terry Smith

I couldn't agree more. This beautiful park is an island of nature so badly needed in the sea of concrete that we call urban environment. It is so depressing to see empty coke cans, food wrappers, or worse yet the aftermath of acts of wanton vandalism, such as the burning of the gazebo (I would have liked to see that person caught and stuck with the full cost of repairs, as well as being banned from the park for life!). I believe however that the answer is not in increased police patrols so much as in public education. Teach the kids in early grades that littering is the most uncool thing to do. Place posters in the park appealing to the public to respect the park, and offer cash rewards for information leading to arrests of persons responsible for acts of vandalism. Finally, there is nothing wrong with bending over, picking up a piece of garbage and disposing of it in one of the many litter bins throughout the park. Let's work together to keep our favorite park beautiful!

I am laughing out loud about the comment that these youth need a community centre to stop using the park.

Do you really think a community centre is going to stop vandalism or kids hanging out in the park at night?

Give your head a shake

Anonymous, your cynicism does not help our community deal with a problem that we have, namely, the lack of pro social activities and venues for youth who currently have nothing to do. If you visited a full scale, fully programmed City Community Center like Scadding Court or Central Neighbourhood House, you would see what a magnet for bored, restless youth the wide range of professionally staffed programmes provided there are. You would also see seniors, new immigrants, mothers and infants, children, the homeless and hungry, the isolated, interest groups, ordinary community residents, students, the mentally challenged, athletes, hobbyists - all drawn to a community hub, building community, working together, looking out for each other. When youth are given nothing productive to do with their creativity and energy and are not invited in to the community where positive role models can engage them and help channel their many abilities, they can feel unimportant and discarded. Inside, maybe on an unconscious level, they resent that and feel angry. Antisocial behaviour is the result.

Have you used the local recreation centres? They are great. And the new one is the nicest of them all!!!! By the way the community centre is for everyone including seniors. I along with many others have used the local centres for years and years.