THE WHIMBRELS ARE COMING!!! 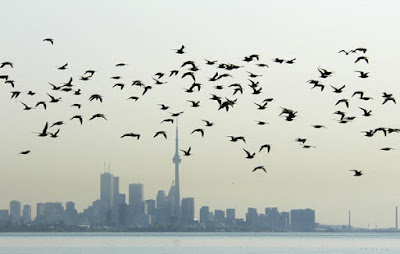 Do you know about the bird featured in our new FOSS logo, the whimbrel? It is a large brownish shorebird with its most striking feature being its long down-curved bill. Every spring thousands of these birds pass by and over Sam Smith Park, on their way from their wintering grounds along the Atlantic coast to their northern breeding grounds, the wetlands along the arctic coast of Hudson Bay. They pass by in groups of 35 to 150 individuals and are very vocal, trilling constantly. Typically, you hear their call before you actually see them. If you are lucky, a group might actually land to rest for a few minutes on the rocky headlands. As many as 2,000 can be seen from our park in one day. They arrive as if by clockwork, every year the same – May 19th to May 24th. Unfortunately, this is a threatened species, due mostly to declining habitat. The Hudson Bay population has declined from 42,500 in 1973 to only 17,000 today.

Watch for “whimbrel watchers” every morning and most of the day during their migration. You’ll probably see Dave Hallet and Wayne Renaud, local Sam Smith birders, and many others out there on the east headland with their telescopes, binoculars and counting charts. This is part of a larger organized whimbrel watch carried out all along the northern shore of Lakes Ontario and Erie. The whimbrel is just one of many species that is making Sam Smith Park and its unique habitat a birding hotspot in southern Ontario.