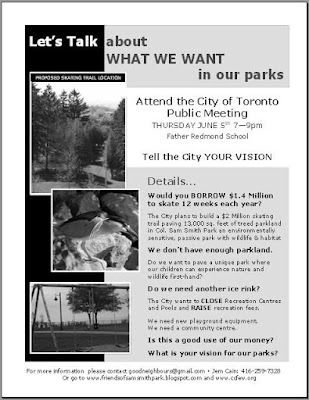 There will finally be a public meeting about the proposed ice skating trail at Colonel Samuel Smith Park - June 5th, 7 - 9 p.m. at Father John Redmond School.
The City will probably announce the meeting next week, but Friends of Sam Smith Park has joined CCFEW and New Toronto Good Neighbours to get the word out earlier (There is a link to CCFEW's website top left).
If you can help deliver flyers, please contact Jem Cain at 416-259-7328
See earlier posts this month on this matter
WHY WE ARE OPPOSED TO THE SKATING TRAIL
SKATING TRAIL - OTHER POINTS TO CONSIDER
AGM GUEST SPEAKER & GOALS AND PRINCIPLES FOR PARK
WE NEED A VISION FOR THE POWER HOUSE
(Double-click on image of flyer to view an expanded version)

I have received your flyer today “Let’s talk…parks.”

I am no shill for any politician or political party. But, I have been involved in community work and the Lakeshore Grounds for well over 15 years.

This flyer is manipulative.

The 13,000 square feet of “treed parkland” to which you refer is scrub vegetation. This area was never planted because it was always designated for the ice skating trail. There are 100 acres of land on Lakeshore Grounds, most of it natural, 13,000 square feet is the size of half a sheet of a hockey rink. Colonel Sam Smith Park is NOT A PASSIVE USE, it is multi-uses.

I fail to see how this amenity which I would use impacts on the wildlife when most of it is out on the spit. The land which you refer is immediately adjacent to the powerhouse.

Yes, we need playground equipment there and at Don Russell and at other parks. Our parks are a mess, our roads are a mess, but this is not a matter of either or.

There is no valid reason for not building this. I would use it and I resent that this group thinks that it would not be valued by many young families.

Perhaps, you could do something about the cricket players which are not from our neighbourhood or the farm fence they forced to put up?

One man's "scrub vegetation" is another man's wildlife habitat - it's all a matter of one's values, sensitivities and long-term perspective.

Dear Mr. Domet,
Thank you for your comments regarding your concerns with our flyer and with the proposed skating trail.
Based on the information that the City has provided the flyer is accurate and we stand by the information in it.
I will address your points one at a time.
The flyer is not manipulative. It asks people if they want to be consulted on how their tax dollar is spent, do they approve of borrowing money for this project, or are there other things they would like to see their money spent on?
We provide a community service by making citizens aware of public meetings through our flyer. We incur the cost of creating and printing the flyers and we donate our time to deliver them.
Ensuring that public consultation and information meetings are communicated to citizens is the responsibility of the City, and we pay for it through our tax dollar. Have you received your meeting notice from the City or the Councillor's office, yet?
We are fortunate to live in a community where people care so much that they volunteer their own money and time in an effort to ensure that consultation is inclusive and to create a better place to work, live and play.
The sad truth is that a community centre has not been built to honour the memory of Ken Cox. The best the City is willing to do is to construct a gym bearing his name, and call it a "community centre". Ward 6 doesn't have a community centre and we will have one in name only when the gym addition on Father Redmond is completed. Ken Cox deserves a real community centre to commemorate his memory and community work.
The description is accurate. It is parkland and it is treed.
We will have to agree to disagree on the definition of a passive park. Colonel Sam Smith is a passive park compared to active or multi-use parks.
Wildlife does not respect man-made boundaries like the road and paths.
Everyday, I see wildlife that is not located on "the spit". The black crowned night heron which is pictured on the flyer has been seen roosting in the fir trees near the powerhouse. In the area where the skating trail is planned, I have seen birds that I have never seen in my backyard, possum, fox, groundhog, hawks, and someone told me they saw deer there – all wildlife.
There are several valid reasons not to construct the skating trail. We have an ample supply of ice recreation venues with the four-pad arena being built a few blocks north of the proposed skating trail and the existing Long Branch Arena, Sir Adam Beck Ice Rink, Prince of Wales Ice Rink and Mimic Arena. This gives us eight ice surfaces located conveniently nearby, two of them outdoor where you can enjoy outdoor skating.
The City and taxpayers can't afford to maintain or fix what we have, now. We can't afford new playground equipment despite the fact it is a real need. The City tried to close down Amos Waites Pool last summer. We are building a skating trail that will cost $20,000 a month to operate. Where will those funds come from, and the funds for maintenance and repair? How much does the maintenance and repair on playground equipment cost each month?
The City of Toronto is responsible for permitting the field to the cricket players, and the City put up the farm fence without consulting the community. I suggest you contact Councillor Mark Grimes' office for resolution of these issues.
On your last point – if you are aware there is illegal activity at the corner of Kipling and Lakeshore, I suggest you report it to the police and your Councillor.
Now that your neighbours have taken the time to ensure you are aware of the meeting, I encourage you to attend and participate in the community consultation.