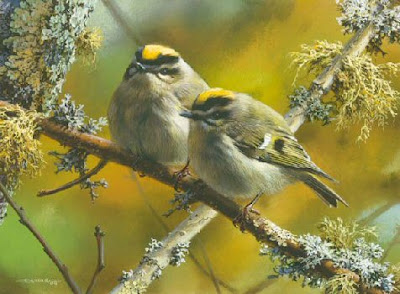 In the bowl, a golden-crowned kinglet was observed yesterday delivering food to another that was obviously waiting to be fed. This suggests breeding activity. While kinglets are not exactly endangered, this does indicate that the park is a significant, potential breeding habitat for non-urban species like this bird that generally does not breed south of the moraine. (It is also worth noting that some species listed by the Canadian Government's Committee on the Status of Endangered Wildlife in Canada as "endangered, threatened or of concern" that have been recently observed in the wooded area around the Power House are Acadian Flycatcher, Common Nighthawk, Canada Warbler, Golden-Winged Warbler, Hooded Warbler and Cerulean Warbler.)
Sam Smith Park is just over a decade old. Over the years to come, as vegetation matures and habitat is allowed to flourish, more bird species will be attracted to the area to breed. They will join the ever-growing list of mammals reported in the park (beaver, muskrat, fox, coyote, deer, mink, rabbit, groundhog, opossum, raccoon, skunk, vole, field mouse). And, along with them, will come more birders, wildlife photographers, naturalists, students and nature lovers. The park is already a "destination attraction" for those who pursue this wildly growing interest. We've all seen their growing numbers in the park. Just imagine how important this feature of our precious park will become in the future if habitat stays protected, preserved and, hopefully, enhanced.
(The title of this post relates to the comment string on the posting PUBLIC MEETING ON SKATING TRAIL IN EARLY JUNE)
Posted by Terry Smith