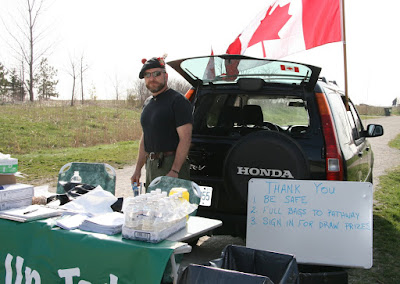 If you were in the park cleaning up today , you probably met Alan Roy, wearing his Scottish war "bonnet", at the post he's manned for the last five years. That's how long Alan has singlehandedly run the annual Sam Smith Park clean-up, long before Friends of Sam Smith Park ever existed. For the last two years, it has been our honour to lend a hand to a guy who is so well organized he even has gifts for the volunteers (colouring books, buttons and pencils for the kids) and a sign-up sheet to count the folks who come to participate (on average, 150 people each year). When asked why he bothers to do this every year, he tells an interesting and moving story. He used to live in the Beaches (the other lakeside community) before moving out to the Lakeshore . While taking a winter walk with his husky in the Glen Stewart Ravine, he came across a neighbour's dog lying in the snow, oozing blood from a wound it had received from broken glass. There was so much blood, "it looked like a murder had happened", Alan recalls. The dog nearly bled to death. As soon as it was possible, he rounded up about twenty friends and neighbours from the community and organized the first ever community clean-up of the ravine park. He did this for fifteen years in a row, rallying up to one hundred and fifty volunteers annually. Alan, you are an inspiration to us all. Thank you.